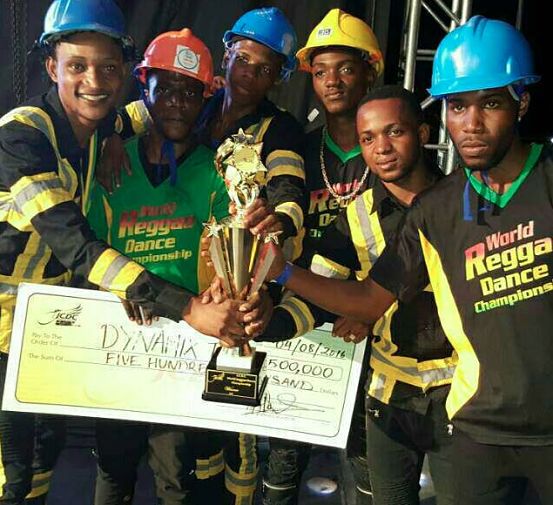 TOTAL TEAM EFFORT: The guys of Dynamix Team posing with their trophy following their big win; (below) a section of the crowd enjoying the finale.

It could have gone either way – to the girls or the boys. That’s how show-stoppingly wonderful the performances were by the all-male Dynamix Team and the ladies-only Outshine Dancers as the grand finale of the World Reggae Dance Championships climaxed inside the Independence Village (Ranny Williams Entertainment Centre) in Kingston on Thursday night. But in the end, by the judges’ final decision, the guys got the nod over the girls.

As such, Dynamix Team (well-coordinated in bright yellow costumes) left the venue with a hefty $500,000 cheque, gift baskets, trophies and memories to cherish. “This winning moment means everything to us,” said an elated Oshane Mitchell, the team leader, in a post-show chat with TALLAWAH. “We’ve been entering this competition for four years now – and we have finally emerged victorious. It feels amazing. Right now the plans is to take our dancing to the next level.”

While the six-member squad (two didn’t get to participate) hails from Frazier’s Content in St. Catherine, the six fierce ladies of Outshine Dancers (clad in military attire) are city girls born and raised. Copping the second place prize of $200,000 and trophies, according to their spokesperson, was their ‘respect’ moment. 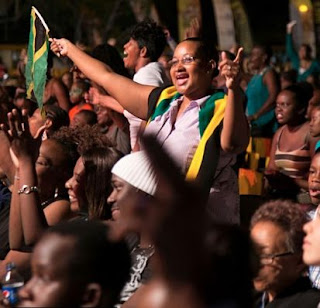 “Last year I felt we were cheated. The placement we got this year is what we should have received last year, so we’re satisfied,” said Christina Nelson, a terrific talent who is a graduate of Cumberland High. Even though Outshine lost out on first place? “It doesn’t matter. We’re happy with this,” she admitted, adding that the group’s members have tertiary education (preferably at the Edna Manley College) in their sights.

Meanwhile, third place went to Street Team (also the Most Disciplined team) which hails from the Waltham Park Avenue area of Kingston. France and Finland were also represented by teams that combined agility and creatively executed choreography to the delight of the massive audience. While Jenny Jenny did an outstanding job as emcee, guest performances came from deejays Bling Dawg and Chi Ching Ching and the Get There squad.