ON THE GRID: Suspenseful Jason Bourne takes you on a loopy, action-packed ride 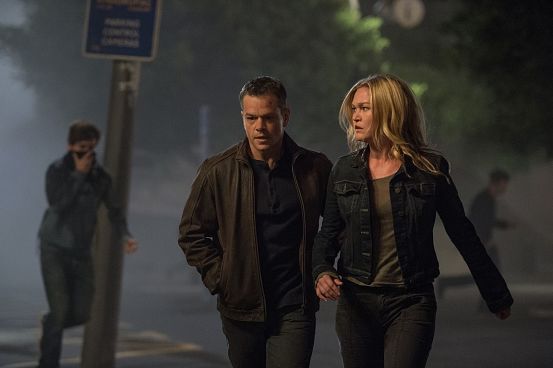 DANGEROUS LIAISONS: Damon and Stiles are on the movie in this scene from the thriller-drama.

You dare not trust your own. The viewer is constantly reminded of this inconvenient truth while watching Jason Bourne, the fast-paced and action-heavy latest instalment in the iconic series that has done for Matt Damon what The Matrix films did for Keanu Reeves.

Exploring themes of loyalty, identity, trust, corruption and the unforgiving past, the thriller-drama takes you on a jolting rollercoaster ride with stopovers in geographical locations as varied and exotic as Athens, Reykjavik, Rome, Berlin and Las Vegas, while navigating a sea of CIA cover-up and supersized egos.

At the centre of all the madness is our noble hero, the former David Webb, still grappling with the effects of the psychological damage he endured while a part of the CIA’s notorious Treadstone programme – one that breaks you down and transforms you into a mean, lean killing machine.

When the movie opens, Jason is frequenting fight clubs to distract himself, desperate to leave that terrible chapter of his life in the past. But when longtime friend, the relentless Nicky Parsons (Julia Stiles) turns up with new information after digging into classified CIA files, Jason realizes there was more to his story all along. Much more. From his father’s suspicious death to the impending launch of a new CIA programme called Ironhand, believed to be twice as bad as Treadstone.

But to get to the truth, Jason must face off with some seriously dangerous players, none more sinister than CIA director Robert Dewey (Tommy Lee Jones in his most cold-hearted role since Two Face) and a deadly sharpshooter (played by Black Swan’s Vincent Cassel) with whom he’s crossed paths before.

Alicia Vikander rounds out the main cast as the sharp and shrewd Heather Lee, the head of the CIA’s cyber division tracking Bourne’s every move. Riz Ahmed nabs a few scenes as a rising tech mogul who gets trapped in Dewey’s web. But this is Damon’s film, and he makes the conflicted Bourne, a man desperate for answers, both a hero worth rooting for and a lost soul trying to find his way ‘home.’

With a superb A-list team at the helm, led by masterful director Paul Greengrass, alongside screenwriter Christopher Rouse and Damon serving as producer, Jason Bourne continues the franchise’s trend of captivating moviegoers with intense, suspenseful and heart-racing spectacle that dually entertains and gives you something to ponder long after leaving the cineplex. Tyrone’s Verdict: A-

Email ThisBlogThis!Share to TwitterShare to FacebookShare to Pinterest
Labels: At The Movies, Current Cinema, Flick of the Week, Matt Damon, Thrillers