THE EYES HAVE IT: Blind Spot delivers an uneven but entertaining mix 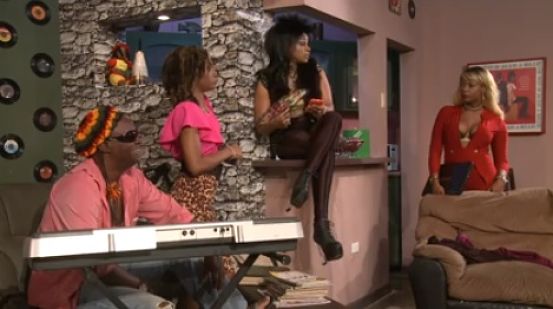 BEN'S PLACE: Cast member sharing the stage in a scene from the show.

Every man is king of his own castle – even the blind. Just ask Ben (Glen Campbell), the music mogul at the centre of all the action in Blind Spot, the reasonably entertaining new show from Jambiz Productions that works well as a comedy-drama but feels like territory playwright Patrick Brown has explored many times before.

All the usual ingredients are here: wit, punchlines, conflict and big laughs delivered by a cast of seasoned players familiar with each other’s acting styles. But the whole thing lacks that sense of oomph and originality.

Blessed with a music production empire that has secured him multiple awards and great private wealth, Ben is living large, even as he continues to follow his passion: make music and earn a handsome living. The devoted Jan (Sakina Deer in arguably her meekest role to date) is his loyal do-it-all secretary, for whom he’s been nursing tender feelings for years. Caryl (Camille Davis) is his raucous sister who eats like a wolf and looks ready for her close-up on a Jamaican version of Love & Hip Hop. Whitney (Sharee Elise) is his latest ‘discovery’, a wanna-be singer who lacks the essential instrument: an ear-pleasing voice.

They all live it up, day in day out, at Ben’s posh upper St. Andrew digs, complete with office, studio, living quarters and tonnes of plaques and memorabilia – evidence of an illustrious career. (The set design is wonderfully arranged.)

But their groovy world gets a violent jolt with the arrival of Scar (Courtney Wilson, very commanding), Jan’s fresh-from-prison ex, a roughneck who wants his pound of flesh and shares a strange connection with Caryl. They are all in for a wild ride when shocking revelations come tumbling out of the closet – a bag of secrets that threaten to destroy everything Ben has worked so hard to build.

The cast turns in solid work, especially Campbell as the visually impaired Don Juan who responds to his crisis with admirable verve. Davis is a sturdy presence but she’s becoming typecast as the angry Black woman. Deer and Elise, on the other hand, seem to have more variety in their Jambiz roles, particularly Elise, who went from loony Greta in last season’s Duppy Whisperer to a funky/punk rock-esque ‘songstress’ this time around.

Overall, Blind Spot, in spite of its shortcomings, is not exactly groping in the dark. Its lively comedic quotient and strong performances go a far way in providing audiences with some laughter and light. Tyrone’s Verdict: B-