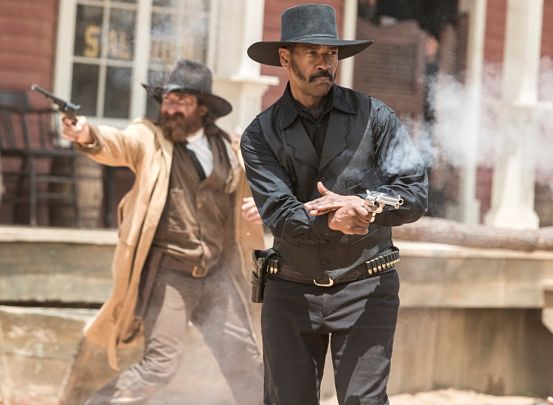 WAR & PEACE: Washington leads the troops in a fight for justice.

There’s a scene in the action-packed western thriller The Magnificent Seven, where Denzel Washington’s Sam Chisholm and Ethan Hawke’s Midnight are reuniting after what feels like many years. The big bear hug and megawatt smiles speak volumes of the bromance and respect between the long-time buddies. The real-life parallels are unmistakable: Training Day costars Washington and Hawke re-teaming on a project helmed by their director Antoine Fuqua, with whom Washington also collaborated on 2014’s The Equalizer.

In other words, here are three Hollywood vets joining forces once more, while refreshing their cinematic mojo to bring to life a western shoot-em-up about a small rural town named Rose Creek being terrorized by a ruthless bully (Peter Sarsgaard as Bartholomew Bogue), who is driving the residents from their homes (by brutal force if necessary) so he can mine the land for gold.

When a courageous widow played by Haley Bennett (her rebellious husband shot dead in the street) pleadingly asks Chisholm (a warrant officer and peace officer from Kansas) for help, he’s reluctant at first but eventually shows some heart and determination to right a terrible wrong.

Rounding up a motley crew of fighters, each with ‘unique’ capabilities, Chisholm heads to Rose Creek to turn the tables and restore to the people what’s rightfully theirs. But, of course, such a life-and death mission can’t be accomplished without sacrifice, strategy and hails upon hails of bullets, as the battle for Rose Creek crescendos to a fever pitch. 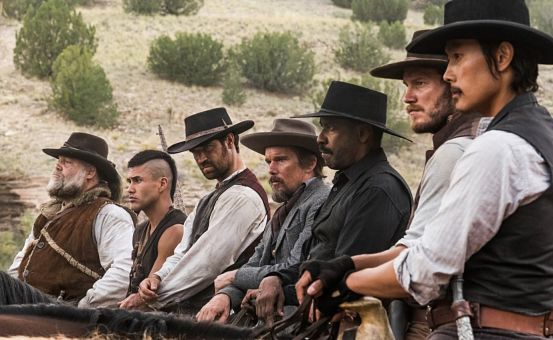 Working with screenwriters Nic Pizzolatto and Richard Wenk, Fuqua manages to transform this intriguing tale into a parable of selfless heroism, justice and the eternal battle between good and evil.

As ever, Washington’s charisma and actor’s actor brilliance form the lion’s share of the film’s appeal and forces the rest of the cast to raise their game. Hawke aside, the film’s solid supporting framework is anchored by the likes of Chris Pratt, Luke Grimes and Bennett.

In short, The Magnificent Seven may not make an arc-altering contribution to the world of westerns, but with its mix of captivating storytelling, James Horner’s apt music, Sharen Davis’ exquisite costumes, among other elements, it soars and marks a triumphant return to form for the Washington-Fuqua-Hawke dream team. Tyrone’s Verdict: A-