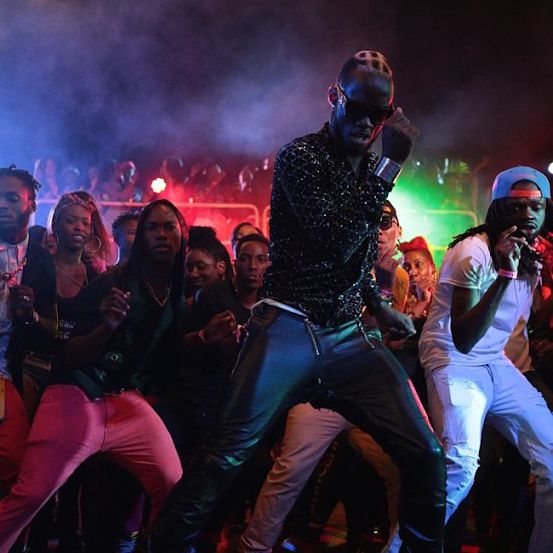 WE OWN THE NIGHT: There's lots of dancefloor action and electric choreogrphy in the film, written and directed by Cannon (below).

With King of the Dancehall set to make a splash at the Toronto International Film Festival (TIFF) this weekend, the high-energy movie, fueled by the pulsating rhythms of the modern dancehall, brings together two fascinating variables: a Jamaican-based story poised to thrill audiences at Canada’s singular annual showpiece event and the feature-film directorial debut of Nick Cannon, a consummate entertainer who is totally Jamaican at heart.

Cannon, who spent much of last year immersing himself in our island culture prior to and during shooting, has spoken in countless interviews about this passion project, for which he attracted a star-packed roster of talents that includes Jamaica’s own Moses ‘Beenie Man’ Davis (who serves as narrator) and Hollywood A-listers like Whoopi Goldberg, who plays his ailing mother.

Cannon takes on the male lead of Tarzan, who leaves his native New York for Kingston to connect with the local ganja hustle in order to raise money for his mother’s medical expenses. Busta Rhymes plays his slick, fast-talking cousin who shows him the ropes and how to get ahead in the world of weed.

But the dancehall scene exerts a strong pull on Tarzan and that’s how he meets Maya (Kimberly Patterson), the girl who teaches him a few of the latest moves and with whom he strikes up a relationship that gets serious fast.

But, as is so often the case, there’s another woman. As expected, what starts out as simple and sweet soon becomes complicated and messy. Overall, we hear, it’s a mix of fate and destiny, love and family, and playing your cards right.

According to TIFF, in addition to Cannon and his co-stars’ strong performances, it’s the movie’s hypnotic and electric dancehall soundtrack that proves irresistible, not to mention the physical poetry and infectious energy of the choreography – hailed as “mesmerizingly complex” and “utterly alive.”

Following its TIFF world premiere, King of the Dancehall is expected to open in cineplexes worldwide, so everyone can experience for themselves what has already been dubbed a must-see movie that’s “slick, fast-paced and undeniably fun.”