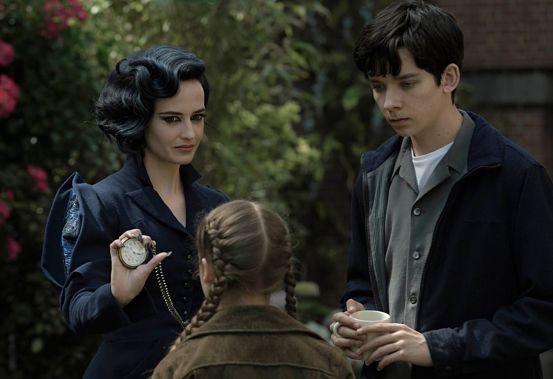 For very young children, being born different can turn out to be either a blessing or a curse. More often than not, they need a guardian to shield them from the cold and cruel world. Lucky for the kids in the darkly entertaining fantasy film Miss Peregrine’s Home for Peculiar Children, they have the titular heroine (the effervescent Eva Green), who is fiercely protective, watching over them with maternal warmth, rapid-fire speech and a strict adherence to time (and her tobacco pipe.)

As it turns out, time plays a pivotal role in the story, as the action takes place over the course of the same 24-hour period every day, thanks to what is called a time loop, which Miss Peregrine re-sets daily to safeguard them from ever-present danger and the kind of persecution that has followed ‘peculiars’ for centuries.

Asa Butterfield (Hugo) plays young Jake, who is like a godsend for Miss Peregrine and the children, coming from America to their UK-based island to continue the selfless work that his dearly departed grandfather started. But trouble comes in the terrifying shape of eye-gouging monsters (led by Samuel L. Jackson), who’ve made Miss Peregrine’s home their latest target. Jake strikes up a close friendship with Emma (Ella Purnell), a bird/girl who has to wear lead shoes or she’ll float away, and together they hatch a plan to defeat these unrelenting new foes.

Dame Judi Dench puts in a cameo appearance as a grandmotherly figure, who has to fill in for Miss Peregrine when certain tough, life-altering decisions have to be made.

Overall, the film, laced with director Tim Burton’s signature mix of eccentric characters finding their place in the world, whimsy and a spirit of adventure, also combines magical realism, lush 3D visuals and a bit of science fiction in transporting us to the fascinating otherworldly realm conjured up by screenwriter Jane Goldman. Tyrone’s Verdict: B