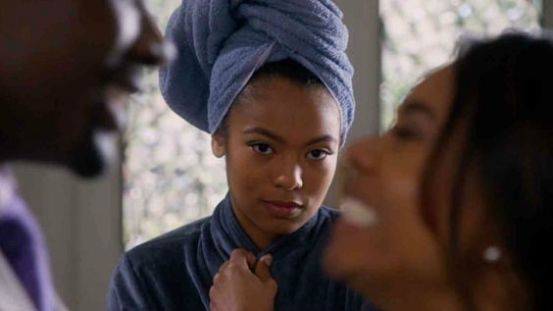 YOU, ME & SHE: All is fair in love and war in this soapy thriller.

If there’s anything trickier than knowing somebody else, it’s knowing yourself. The three desperate folks who find themselves wrapped up in a scorching ‘ménage a trois’ in When the Bough Breaks have to grapple with this inconvenient truth. But that’s the least of their troubles when things take an explosive turn before devolving into a life-and-death tug-o-war.

And it all began so innocently. Successful attorney John Taylor (ageless hunk Morris Chestnut) and his stellar wife Laura, a skillful culinary artist (the stunning Regina Hall), seem to have it all: fulfilling careers, wealth and peace of mind. Everything except the one thing they want most in the world: a child of their own. Sadly, after three miscarriages, Laura can’t bear children.

The couple reaches out to a medical consultant who introduces them to Anna Walsh (newcomer Jaz Sinclair), a sweet young waitress who has agreed to be their surrogate. “I have the opportunity to help someone who can’t have a child,” she says, sounding truly angelic.

Anna enters their lives, and even gets a room in their guest house after leaving her abusive boyfriend. Things are going swimmingly well until Anna starts overstepping her boundaries, wanting something more with the happily married John. As her slinky seduction routine intensifies, it becomes clear that Anna may not be who she claims to be, forcing the Taylors to make some uncomfortable decisions.

What will become of their baby that she’s carrying?

What plays out is a familiar, formulaic episode of “You, Me & She”, but the soapy twists and turns of this story are as salacious and intensely watchable as they scandalous.

Collaborating with screenwriter Jack Olsen, director John Cassar makes some daring directorial choices, but in the end the movie falls short of the originality we were expecting. Watching When the Bough Breaks, you can’t help but draw parallels with flicks like the Idris/Beyoncé crazy-stalker-chick thriller Obsessed and last year’s emotional rollercoaster The Perfect Guy, which coincidentally had Chestnut paired up with Sanaa Lathan.

This time around, he heats up the screen with Hall – rolling up their sleeves and rolling with the punches as the high-stakes, all-or-nothing fight accelerates to the bitter end. Tyrone’s Verdict: B-

Email ThisBlogThis!Share to TwitterShare to FacebookShare to Pinterest
Labels: 50-Second Film Review, At The Movies, Current Cinema, Flick of the Week, Thrillers