A BEAUTIFUL MIND: Brian George hailed for his brilliance, generosity and work ethic at thanksgiving service 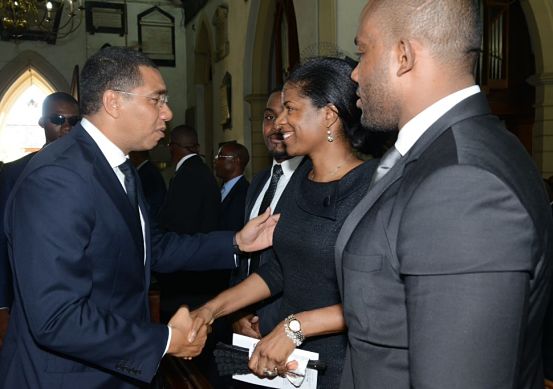 HARD TO SAY GOODBYE: Holness offering words of comfort to George's widow, Keneea, at Saturday's service. (Below) the late business titan with sons Matt and Chris in happier times.

“It was a wonderful experience knowing Brian George, who had such a joyous relationship with life,” shared Rev. Dr. Robert Thompson, as he delivered the homily at Saturday’s service of celebration and thanksgiving to mark the passing of a man who’s can-do spirit, work ethic and sheer stamina, generosity and fierce commitment to family and corporate social responsibility never failed to inspire those around him.

During Saturday’s well-attended service, at the St. Andrew Parish Church in Half-Way-tree, where PM Andrew Holness, Dr. Peter Phillips and Olivia ‘Babsy’ Grange sat up front, George was repeatedly hailed for the remarkable talents and qualities that seemed to guarantee his success.

His good friend Walter Scott, who delivered the remembrance, drew special attention to the fact that despite health challenges over the last two-and-a-half years, George was always working, fulfilling his duties as President and CEO of Supreme Ventures Limited, one of the largest publicly traded companies in Jamaica – under the chairmanship of his recruiter Paul Hoo, who read the First Lesson. “He had breathtaking agility. The speed and sharpness of his mind was Bolt-like, but he was neither pompous nor arrogant with his supremacy,’ said Scott, who also couldn’t help recalling occasions that highlighted his wit and humour.

Trini-born but Jamaican to the core, Brian George was an avid basketball player and a football running back at New Orleans’ Tulane University back in the day. His great passion for sports seems to have rubbed off on his beloved boys, sons Matthew, 32, and Christopher, 31, who represented his native Trinidad & Tobago in water polo at the Rio Olympics. “A father couldn’t be happier or prouder of his sons,” Scott said. 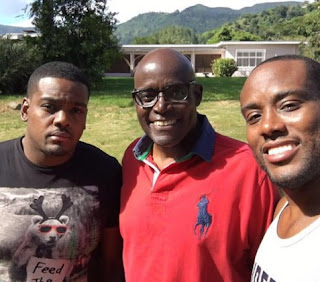 But best of all, he went on, George found the love of a good woman in Keneea Linton, the fashion-design whiz who nursed him back to health in the rough times and gave him the best seven years of his life via their “transformational” marriage.

For Chris and Matthew, who couldn’t hold back the tears as they took turns reading their tributes, Brian was “the perfect father”, the consummate social butterfly who “was always smiling” and whose “need to help others was unparalleled.” “My father belonged to all and he shared so much of himself with everybody,” Chris told the rapt congregation. “He had a depth of character that is rare in Jamaican men.” Said Matthew, “Jamaica gave him a strong foundation to begin the next chapter of his life here. But he was the perfect father – always present and just a phone call away.”

> GONE TOO SOON: News of Brian George’s death brings a wave of tributes