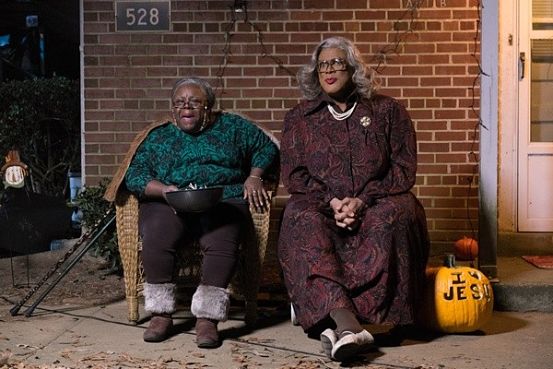 In a previous life, Madea Simmonds was a very successful stripper. That’s just one of her many outrageous confessions in Tyler Perry’s latest big-screen comedy, Boo! A Madea Halloween, a laugh-out-loud riff on family dynamics and parenting, teenage angst and the world of college kids and frat parties – and the dreaded fear factor.

When it comes to his Madea flicks, Perry (who takes on multiple acting roles, in addition to his writer-director-producer credits), has never refrained from ratcheting up the hilarity and making smart, keen observations about the Black experience with his trademark wit, morality and preachiness. It’s all here, with the expected forgivable flaws – and enough Madea punchlines to keep you quoting long after you leave the cineplex.

It’s Halloween and Brian Simmonds (Perry) needs a ‘babysitter’ at his home to keep an eye on his young son and headstrong 17-year-old daughter Tiffany (Diamond White, one to watch) when he leaves for the night to tend to some business. He calls up aunt Madea (Perry) and not until he opts to pay her that she agrees to take the job, with her gossiping gal pals Bam (Cassi Davis) and Hattie (Patrice Lovely) tagging along. Her brother Joe (Brian’s dad, played by Perry) also winds up in the mix. 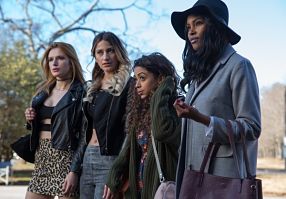 The adults are in for a warm time when the kids decide to roll out the tricks and pranks. Things later heat up when Tiffany and her BFF Aday sneak off to attend the party at the frathouse down the street, giving Madea no choice to go over there – and set it off if necessary. But it’s Halloween, so the freaks and ghouls are out in their numbers and, to say the least, Madea soon realizes that she isn’t as tough as fearless as she thought.

As with most Perry productions, it’s the high comedic quotient that’s worth the price of admission, and Boo does not disappoint. As Madea, Perry is an unstoppable force. There’s no telling what will pop out of her mouth next, but her timing always hits the mark. At the same time, there are valuable life lessons to be gleaned from the film as well, and sobering ideas for raising teenagers, especially if you, like Brian, don’t believe in corporal punishment.

Overall, Boo! A Madea Halloween offers a mixed bag of tricks, but the big laughs and ‘epic’ drama are a real treat. Tyrone’s Verdict: B

Email ThisBlogThis!Share to TwitterShare to FacebookShare to Pinterest
Labels: At The Movies, Comedy, Current Cinema, Flick of the Week, Tyler Perry