SAY IT WITH A SONG: Bazodee connects with enchanting music, heartfelt performances 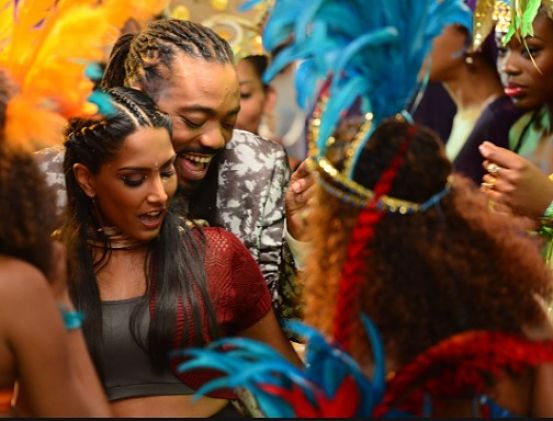 THIS MAGIC MOMENT: Mantano and Perera have a sweet chemistry all their own.

The Caribbean term “bazodee” refers to a state of being musically enchanted. Watching the freshly released romantic comedy-drama of the same name, that’s precisely how you feel: transported to a Bollywood-inspired world where the exotic music and lush, tropical atmosphere lifts you up and occasionally puts you in the mood to dance.

It helps, too, that the movie’s male lead is filled by none other than soca kingpin Machel Mantano – an immensely likeable man of many talents whose supernova star power, coupled with the enchanting music, gives the movie its lifeblood. But don’t interpret that to mean the story is all gloss and no bite. In fact, at the core lurks a family feud on the cusp of bitterness, some infidelity and a couple of broken hearts thrown into the mix.

Overall, Bazodee is a well-acted and reasonably satisfying cinematic treat out of the Caribbean that looks good and boasts a terrific soundtrack.

Mantano is Lee de Leon, a struggling but very talented musician who, armed with his trusty ukulele, has just returned from England to his native Trinidad looking for work. That’s when he meets Anita Pantchouri (Natalie Perera), a Lisa Hanna look-alike and the bride-to-be of a gorgeous hunk named Barrett (Staz Nair), who hails from a well-to-do real-estate savvy family. Anita loves Barrett but, as she soon discovers, Lee is an irresistible mix of down-to-earth and street-smart whose music becomes her catnip.

Lee, who is hired to play at her engagement party, is equally smitten and before you know it, they’re head over heels for each other. This of course means trouble for the Anita/Barrett relationship.

Meanwhile, financial hard times hit Anita’s father (a real-estate tycoon played by the towering Kabir Bedi) at the height of preparations for the wedding. And, to make matters worse, Barrett’s slithery, uptight younger brother Nikhil (Valkime Rampersad), who seems forever confined in a suit, is snooping around looking for dirt. With Carnival season heating up, tempers flare and hopes are dashed when the clandestine Lee/Anita romance hits the spotlight and well-laid plans for the future go up in smoke.

Director Todd Kessler and writer Claire Ince make a strong team, and together they whip up a savoury slice of cinema that delights and sheds light on certain Trini customs, while exploring relationship dynamics, fate and destiny, and the very blurry line between love and lust.

In spite of its shortcomings, Bazodee connects and tunefully echoes predecessors like Destiny and One Love. What these films all share in common is not just a blend of heartfelt storytelling and attractive musicians taking a spin as actors; you can’t escape the vivid reminder that when it comes to romance, island style, it’s always best to say it with a song. Tyrone’s Verdict: B