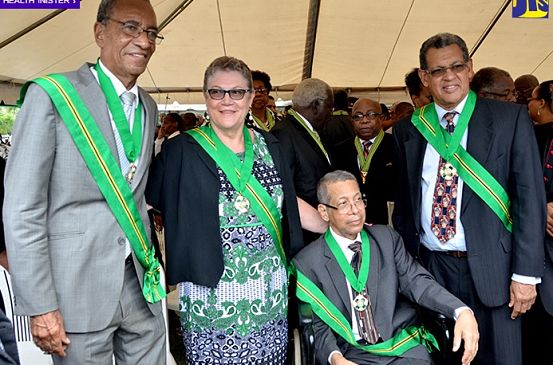 The scene was laid out for a reflective and inspiring celebration of Jamaicans being recognized for their outstanding contributions and achievements in their respective fields, their valiant acts and their years of long and meritorious service. Occasion was the annual National Honours & Awards ceremony, hosted by His Excellency, the Governor-General, Sir Patrick Allen, on the lawns of King’s House on Monday (Heroes’ Day). As ever, TALLAWAH was in the thick of things, taking in all the action and scoring some scoop:

1. How come Mutabaruka was a no-show at the King’s House ceremony?
“He had to work. He had a contractual arrangement that he could not break,” his darling wife Jacqui Hope told TALLAWAH during a brief interview afterwards. Mrs. Hope, who accepted the award on her husband’s behalf from Sir Patrick, told us that Muta felt “happy and proud” to be honoured by the country in this significant way – with the Order of Distinction in the rank of Commander, for outstanding contribution to literature and journalism. And the awards keep coming. This month-end, the renowned radio host, dub poet and enduring cultural icon will fly off to London to collect a community service award from a Birmingham-based civic group. But before that, he’ll be among the stalwarts paying homage to the late great Peter Tosh at the tribute concert slated for Oct. 22 at the Pulse Complex, New Kingston.

2. What has Shabba Ranks been up to since we last saw him, wowing the crowd at Reggae Sumfest in 2014?
The dancehall living legend and two-time Grammy winner, now a member of the Order of Distinction (Officer Class), says he continues to do what comes naturally to him: write and record music and go on tour. “As long as Shabba have life, making music will never stop. And we just a gwaan tour the world,” the 50-plus year-old veteran (awarded for taking Jamaican music internationally) told TALLAWAH. “Just tell the people to look out and listen up because ah nuff music ah come soon. I’m working non-stop. Step by step.”

3. How does Cliff Hughes feel about getting his due?
Though he’s accustomed to interviewing celebrities and public figures in his line of work, the tables were turned on Hughes on Monday, as reporters sought him out for one-on-one time. “It means a lot,” he says of receiving the CD for Media and Communication, “because when your country pauses to recognize you, it says that your hard work has made a difference, and for that I am grateful.”

4. Where did Adam disappear to?
Anyone looking to snag an interview with Sandals CEO Adam Mark Stewart were left sorely disappointed as he was nowhere to be found when the curtains came down on the ceremony. Stage fright? We hope not. We’d like to think that duty called and he had to hasten away. After all, the man has an empire to run. Stewart, heir apparent to the ‘Butch’ legacy, took home the Order of Distinction (Commander Class) for outstanding contribution to tourism and the hotel industry.

5. When is Diana McCaulay’s next book coming out?
Sooner than we thought. In fact, McCaulay is now speaking with publishers about Loving Jamaica, which explores her years of work as an environmental advocate. “It’s about my environmental journey, but it’s written as a memoir. It’s my first non-fiction, and I think readers will enjoy it,” says the Jamaica Environment Trust (JET) president, who was honoured on Monday for sterling contribution to the protection of the island’s environment, and whose acclaimed novels include Huracan, Dog Heart and Gone to Drift.

6. Who were the real-life heroes honoured this year?
After making headlines in October last year, for courageously rescuing a drowning boy from raging flood waters in the Sandy Gully, 26-year-old Orlando Brown (a resident of Ackee Walk in St. Andrew) was presented with the badge of honour for gallantry by Sir Patrick. A badge was also presented to Merle Grove High senior Antini Renique Henderson whose swift action and bravery saved the life of her mentally challenged sister from the clutches of a burning house in January. “I’m feeling good about this award,” Brown told TALLAWAH at the ceremony, “but there’s still a lot of flooding in that gully area because it needs major work to fix the problem.”

7. Who are the new Order of Jamaica (OJ) inductees?
Though he’s now confined to a wheelchair due to ill health, former health minister Dr. Ken Baugh was in cheerful spirits as he was surrounded by photographers, former Gordon House colleagues and well-wishers as he was recognized for distinguished service to Parliament, public service and medicine. A long-time advocate for the welfare of Jamaica’s elderly population, Prof. Denise Eldermire-Shearer was saluted for her work in that field. Prof. Renn Osmond Holness was cited for contribution to neurosurgery, while the statuesque Ambassador Anthony Johnson received his appointment for distinguished contribution to the Jamaican Foreign Service, the public sector and the private sector.