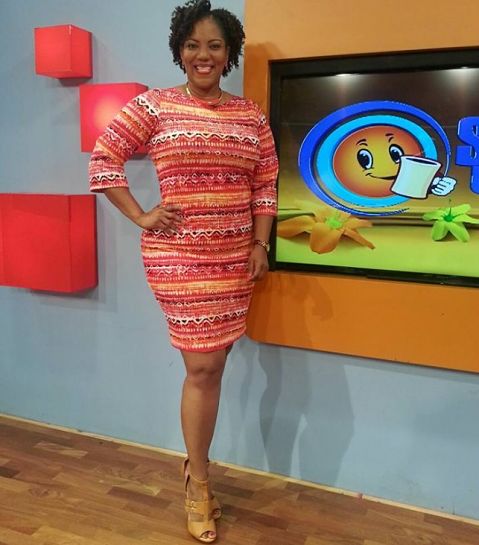 RISE & SHINE: "As an actress, I aim for diversity," Harris says of her impressive body of work.

You can say this for Dahlia Harris: she is hard work personified. When she’s not brightening up morning TV as a co-host on Smile Jamaica, she’s producing hit plays like this season’s remount of Same Difference, lending her expertise as a creative/cultural consultant and PR whiz, nurturing young theatre talent, and landing her first lead movie role, in Lennie Little-White’s ensemble comedy-drama It’s A Family Affair, which opens in local cinemas this week. And that’s not all: she’ now making plans to embark on a singing career(!) and mounting another gospel play – a musical tribute to The Grace Thrillers. TALLAWAH recently caught up with the wonder woman (currently in her mid-40s) at the Phoenix Theatre to hear about what’s new and what’s next in the Dahlia-sphere.

TALLAWAH: By now everybody has seen the trailer for It’s A Family Affair, in which you tackle your first cinematic lead role, playing a frustrated wife who strikes it rich! What was the overall experience of making this movie like for you?
Dahlia Harris: I think one of the things that worked for us was that we had a very good team. Every single person was committed to getting it done. We only had six days, but there was no complaining. Everybody just stepped up to the plate, and that’s how we got it done.

TALLAWAH: And comedy kingpin Ity Ellis plays your police-officer husband. On set, how were you all able to stay serious long enough to finish the shoot?
Dahlia Harris: (Laughs). Well, knowing that we had to remember the lines kept us serious. Working with Ity was a bag of laughs. Everything coming out of him is so funny, but as an actor he takes his work seriously.

TALLAWAH: Based on the feedback you’ve received since the recent premiere, what are people saying about It’s A Family Affair?
Dahlia Harris: It’s not yet open in the cinemas, so a lot of people haven’t seen it. But those who I spoke to, who came to the premiere, say they enjoyed it.

TALLAWAH: So Miss Movie Star, are more film roles in your future?
Dahlia Harris: I hope so! We all had to audition for this film, so for me it will depend on what the next film is about. But doing more film is something I’m looking forward to.

TALLAWAH: You’re known for your work in the theatre, television, public relations, the culture ministry, and now cinema. What is your true passion?
Dahlia Harris: If I said music would you believe me (Laughs). At different times I enjoy different things. I’m definitely passionate about my work in theatre. But, generally, it depends on what’s happening at that specific time.

TALLAWAH: Speaking of the theatre, over the years you’ve portrayed a fantastic array of strong Jamaican women on the stage. Which ones do you find that you reflect on the most?
Dahlia Harris: There are so many of them. But, career-wise, once I’m finished with a role I try not to bring that character back. I used to do a lot of comedic roles in my early years, then mostly dramatic roles. And doing It’s A Family Affair, there’s a lot of comedy in it. As an actress, I aim for diversity.

TALLAWAH: DMH Productions has been doing amazingly well, churning out quality Jamaican theatre and succeeding where others have failed. As a theatre producer, how do you deal with the challenges?
Dahlia Harris: It’s not easy, and it’s particularly difficult when you don’t have your own space, which affects the frequency of your work. You basically have to work with what’s available. I said I’d do a gospel play and a regular play every year, but because of space I haven’t been able to do that. But my next gospel play is a musical tribute to The Grace Thrillers, because when I looked at their repertoire I realized that so many of their songs address a lot of the social issues the country is facing right now.

TALLAWAH: That’s a clever idea. On reflection, Dahlia, what does success mean to you now?
Dahlia Harris: Just being able to put on quality shows, establishing a certain standard and maintaining it. When an audience member comes up to me and says, ‘Dahlia, that was a great show; I enjoyed that.’ That’s success for me.

TALLAWAH: What’s next for you? What’s left to accomplish?
Dahlia Harris: I want to do some music. I’ve always wanted to do some recording, but I never had the time. I’ve been in discussions with Dennis Howard about doing some songs, so we’ll see what happens.

TALLAWAH: Introducing Dahlia the songstress! How intriguing! (Laughs). Given your vast success and been-there, done-that expertise, what advice do you always give to youngsters?
Dahlia Harris: Take your work seriously. If you don’t have the focus and the discipline, you can’t go anywhere. Take what you do seriously; approach it with an open mind and a willingness to grow.