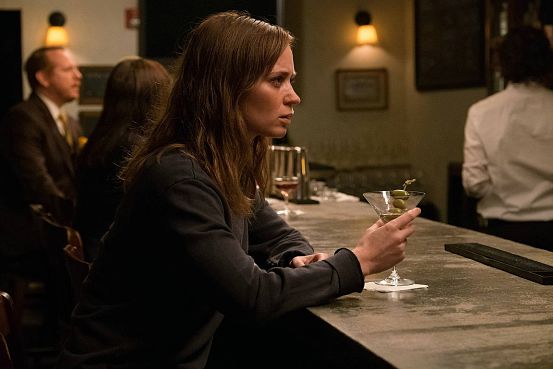 With electrifying performances from an accomplished cast, led by Emily Blunt, a haunting musical score and atmospheric cinematography, the film reels you in, making powerful statements about intimate relationships, dignity and the dark side of human nature.

Blunt plays Rachel Watson, a thirtysomething divorceé whose worrisome drinking problem has turned her life into one big mess. Having lost her job and her husband, she now rides the train every day, sipping booze from her water bottle and putting her over-active imagination to work.

Every day the train takes her past a high-middle-class neighbourhood, and she quickly develops an obsession with one particular pair of lovers that she sees – Megan (Haley Bennett) and Scott (Luke Evans). They become for Rachel “the perfect couple,” the living embodiment of what she had (and lost) with Tom (Justin Theroux), who has since married Anna (Rebecca Ferguson) and had a baby.

When Rachel isn’t fixating on this “perfect couple” – what’s going on in their heads, how they make love – she’s harassing Tom and Anna, one time leaving a nasty phone message while half-drunk; another time breaking in their house and practically kidnapping their baby. Her erratic behaviour worries Cathy (Laura Prepon), the friend who has given her a place to stay but is at the end of her rope.

Then comes the jolt. When Rachel witnesses something shocking from her train window – involving her “perfect couple”! – it sets in motion a series of events that involves heartbreak, relentless police officers and murder most foul.

But if there’s one point that this engrossing movie drives home it’s that appearances can be deceiving. Perfection is a fantasy; it doesn’t exist in the real world. Lurking behind that veneer of wholesomeness and beautiful simplicity, more often than not, is a brutal realism that will jerk you to the core.

Working with talented screenwriter Erin Cressida Wilson, Taylor (who transformed Kathryn Stockett’s The Help into a bonafide Oscar contender) works his magic once again with Girl on the Train, earning the kind of laudable (dark and deliciously twisty) results that David Fincher achieved with Gone Girl.

His actors are dynamite. Blunt is simply riveting as the alcoholic whose ‘voyeurism’ brings her more drama than she bargained for. Bennett, on the other hand, nails the restless, schoolgirlish Megan, whose wanton ways bring dire consequences, while Ferguson proves that her Anna is both refined housewife beauty and roll-up-those-sleeves brawn.

Completing the film’s trifecta of macho men (alongside Theroux and Evans), who all seems to have something to hide, is Edgar Ramirez (Hands of Stone), playing Megan’s psychiatrist to dark and brooding perfection. There’s that word again. Tyrone’s Verdict: A-

Email ThisBlogThis!Share to TwitterShare to FacebookShare to Pinterest
Labels: At The Movies, Current Cinema, Emily Blunt, Film Review, Flick of the Week