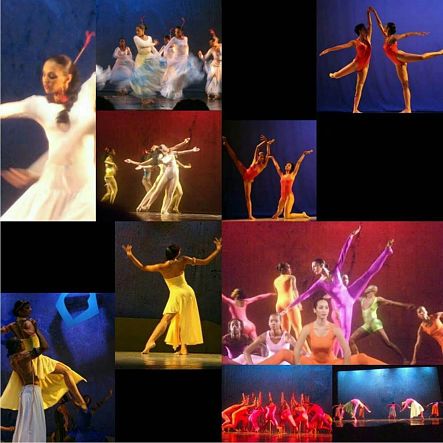 Eight new works populated the 2016 season of the Company Dance Theatre of Jamaica, that consistently outstanding troupe full of impressive young talents who bring the poise, passion and maturity of artists twice their age. Under the direction of the tireless Tony Wilson, the company celebrated its 28th anniversary at the Little Theatre on the weekend, presenting pieces – including two new works – that were alternately electric and exuberant, inspiring and introspective. What they all had in common, however, was bold, vivid imagery that provides a feast for the senses.

“Colours,” a signature work choreographed by Wilson, gave the show a lush, memorable opening, with its five movements anchored by rousing energy and elastic motion. As the title suggests, the visual power of the work is a large part of its appeal – that, coupled with the laudable efforts of the soloists, as the piece crescendoes to its big finish.

And speaking of soloists, star boy Steven Cornwall made light, effortless work of Pedro Bosch’s “Nature Boy,” a physically demanding work steeped in rigorous choreography. But Cornwall proved he’s more than up to the challenge, using his taut physique to sterling effect, while working with a sizeable bench as his lone stage companion. For the talented young dancer, it’s a splendid solo adventure (exploring identity and solitude), which reminds you of such NDTC classics as “Sweet in the Morning” (performed by Marlon Simms) and “Don’t Leave Me,” Mark Phinn’s magnum opus.

The solo spotlight also shone brightly on Courtney Payne, who tackled Renee McDonald’s latest offering “One80,” one of the two new pieces, with gusto. Driven by supersonic Kanye West beats, it’s about liberation, pain and self-worth, and found Payne seemingly restricted to a tiny space (the ‘torture’ is palpable) until she finally decides to free herself. To say the least, it’s a compelling work, but we expect nothing less from McDonald, who also choreographed “Spectrum,” a 2012 offering that pulses with a rhythmic ferocity and comes laced with acrobatic movements.

Similar qualities could be cited to describe Terry Hall’s pas de deux “Presence of the Enemy,” performed by Nicole Hall and Leanne Hall, moving to a menacing score by Cirque du Soleil. Dressed up as warrior princesses, the duo moved in sync and apart, never letting us forget the work’s big themes of danger and survival – with the constant reminder that it’s a jungle out there.

Meanwhile, the ubiquitous, inescapable twin themes of life and death informed Arsenio Andrade’s “Uncovered” (2008), performed by the women of the company clad in all-white costumes – and “Colony,” the season’s other new work, crafted by Wilson. While the flat finish that ended “Colony” was a mild disappointment (given the robust start), “Uncovered” roared to life via the confident delivery and attitude of the girls, who immersed themselves in the spiky musical accompaniment from Africa Chill Out.

The evening’s curtain-closer was “Calabash” which, like “Colours,” offered a burst of passion and visual power. It’s a celebratory tour-de-force whose five movements (not to mention the splendid costumes, lighting and eclectic musical score) each add something distinct and meaningful to move the piece forward.

What’s more, works like “Calabash” and “Colours” reflect the overall spirit and mission of the Company Dance Theatre, which continues to present dance as a captivating art form for audiences to taste and see and feel.