A HOUSE IS NOT A HOME: Tulloch hits hard with funny, fast-paced Bad Breed 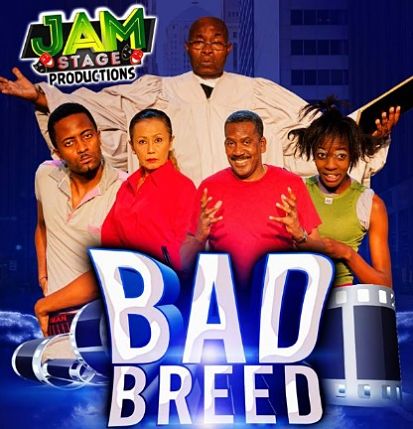 A DIFFERENT 'BREED': Buckle up for a wild and bumpy evening at the theatre.

EVERY Jamaican community has one – that father-and-son duo who behave more like rivals than kin, constantly at each other’s throats like wild animals and prone to violent clashes. We are introduced to an unforgettable pair in the aptly titled Bad Breed, the latest theatrical provocation from prolific scribe David Tulloch.

Strongly acted and smartly written, the roughly two-hour-long dramedy takes a bold, unflinching look at domestic dysfunction, teenage angst and the often heavy price of secrets and lies. Though the show’s pacing needs some tightening and the plot is a bit thin on the meat, it’s a hugely enjoyable romp that makes it clear that Tulloch’s storytelling mojo is still firing on all cylinders.

Reeling from the death of his beloved mother, 17-year-old high-schooler Jason James (Poyser) has morped into a self-proclaimed gangster, heavily into stage show promotion and lottery-type scamming – and seems desperate to liberate himself from the shadow of his disapproving alpha-male father Wilfred (Nicholson), who will stop at nothing to keep the boy in line, even if it means turning their house upside down.

Things only get more complicated for the two of them when Wilfred pops the question to his longtime steady Jackie Lawson (Salmon), a proud “Christian” woman who impressively dresses like a million bucks but is secretly a schemer with the heart of a sewer rat.

She has much in common with Pastor Joe (Grant), a black-clad preacherman with very worldly appetites, to say the least. And what can we say about Teeta (fresh face Gordon), the very mischievous and colourful girl from next door who has a thing for Jason and makes it very clear that “everything ah my business.” She’s a natural circus act and brings ample comic relief to the stage.

The action, which takes explosive turns at times, unfolds mainly inside the James’ living room, which becomes both battlefield and the site for the shedding of major secrets.

Nicholson, the veteran, and Poyser, the fast-rising star, tackle their physically demanding roles with gusto. As Teeta, Gordon has tonnes of fun unleashing her brand of mischief on her castmates. And don’t get us started on those outlandish outfit choices. Grant is overly expressive in some scenes, but he brings that same fiery energy he delivered in such roots-play classics as Like Father, Like Son and the Bashment Granny hits. Salmon, meanwhile, gets to eloquently channel some of that Vera Lue-Chen primp-and-properness in crafting her latest matriarchal diva.

Ever the keenly observant writer who gives it to us straight, no chaser, Tulloch seems to have mastered the art of spinning an all-Jamaican story that can be both refreshingly funny and brutally frank. Minor flaws aside, Bad Breed is right up that alley, rigorously fusing the tough and the tender, the macho and the ‘magical’ with laudable results. Tyrone’s Verdict: B