BACK IN STRIDE: Actor Jerry Benzwick on his latest role, gratitude, and promoting rugby in Jamaica 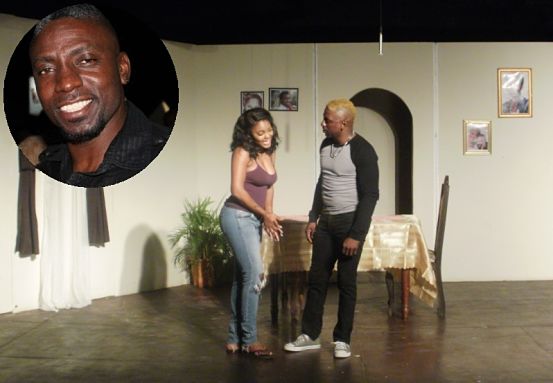 PLAYING THE PART: Benzwick putting the moves on Christene Marshall in this scene from Tulloch's new play.

Whether you saw him pleading his case in court in the woman-rapes-man drama Against His Will or coming to terms with a stinging betrayal in A State of Affairs, Jerry Benzwick’s acting performances always leave a lingering impression. He was off the radar for years, but this month he makes a solid return to the boards in the keeping-the-faith dramedy Across the Bridge, starring opposite Leonie Forbes and writer-director David Tulloch. In a catching-up interview, the 40-plus actor, businessman and sports administrator tells TALLAWAH what he’s been up to and what’s coming up next.

TALLAWAH: You took a long self-imposed hiatus from theatre. How did you spend the time away from the stage?
Jerry Benzwick (JB): You could say I was trying something different. Searching and exploring a different space. I spent most of it in the States, and I definitely needed that time away. But after a while I felt very strongly that I needed to come home. Something special is going to happen in the next chapter of my life, and I want it to happen in Jamaica.

TALLAWAH: Welcome back! Jamie Scott, your character in Across the Bridge, is a player and a hustler, but deep down he’s no Prince Charming. Are there any similarities between Jamie and Jerry we should know about?
JB: Oh no, no sah. I’m not that evil (Laughs). And a lot of people who’ve seen the show never expected it; they all thought I was genuine. But I find that the bad guys are more fun to play. I want to play a really evil character in one of my next shows.

TALLAWAH: As Chairman of the Jamaica Football Rugby Union, you’re in the news a lot these days, seeking sponsorship for the association. Tough job.
JB: It’s a tough task. The local union gets some funding from the international body, but most of what we do as administrators is voluntary work; we’re not paid for it. And most of the guys have to pay their own way. Our main aim is to promote the sport, empower the players and get them ready for international competition. Right now we’re preparing two teams for a tournament in Hong Kong in April. Airfare is being provided for the guys by the international body, but we have to find money for gears and nutrition.

TALLAWAH: Theatre, sports, business. What’s your true passion?
JB: All of them, but rugby was my first love. From I was going to high school [St. Catherine High]. I’m a do-what-you-love kind of person. So even if there’s no money in it, I’m gonna do what I love. But you must pay the bills (Laughs).

TALLAWAH: If you had to choose a most memorable stage role from the body of work you’ve created over the years, which would you select and why?
JB: None of them compares to Oroonoko, a role I played while at the School of Drama. It’s a true story about an African warrior prince who is betrayed and sold into slavery. He tries to stay respectful and dignified to the white supremacists, but it ends tragically. One of my dreams is to produce and remount it so that this young generation can get to see it.

TALLAWAH: What are your thoughts on the current state of the Jamaican theatre industry?
JB: It’s vibrant. I like what I see after being away for so long. Of course, the cost to put on a production is high and advertising is very expensive. But you see where producers are being crafty. So theatre in Jamaica can’t dead.

TALLAWAH: You’ve always managed to juggle multiple projects all at the same time. What’s left for you to accomplish?
JB: A lot. I want to write, direct and produce, and mi nuh start yet (Laughs). So there’s still a lot left for me to do.

TALLAWAH: At your age, are you satisfied with the hand life has dealt you? Do you feel older and wiser?
JB: Definitely. I’m always happy. I love life. So even if I’m broke, there’s always something to be thankful for.

> Catch Benzwick and his castmates heating up the stage in Across the Bridge at the Phoenix Theatre, New Kingston. Tickets: 442-1669.