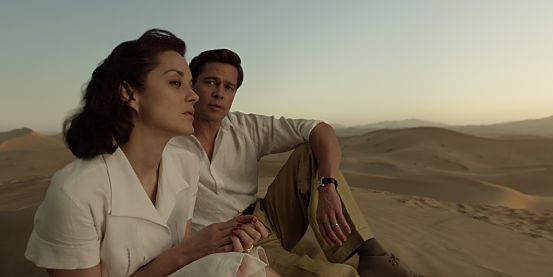 NIGHT CATCHES US: Cotillard and Pitt must cope with the pressures of war.

The most visceral and unforgettable scene in Allied comes when Marion Cotillard's character Marianne is giving birth at a roofless hospital in London, as German war planes buzz overhead and explosions go off all around her and the group of nurses. You have to ask yourself, 'Is this really happening?'

When this gritty film, centred on espionage, betrayal and patriotism above self, is not being brutally honest about the ravages of war, it shares a wrenching love story about two people who discover too late that you always hurt the one you love, intentionally or not.

Directed by Robert Zemeckis, with a solid script by Steven Knight, Allied (set in the 1940s) follows Max (Brad Pitt), an RAF commander, and Marianne (Cotillard), who becomes his wife after they finish an undercover job together in Morocco and relocate to London to tend the flame of their blossoming romance. In another spectacular scene, their heated passion blazes like a supernova as they make love in a car out in the Moroccan desert while a bitter sandstorm rages outside.

Becoming man and wife and playing house with their newborn, Anna, you couldn't find two happier people. That's why it comes as such a jolting shock for Max to learn from his superiors that his darling Marianne may not be the woman she claims to be. When a sting operation is set up to catch her in flagrante delicto, the ordeal proves unbearable for Max who feels his world crumbling around him.

A skilled director who brings out the best in his actors (remember Tom Hanks in Forrest Gump and Denzel Washington in Flight), Zemeckis zones in on the pain and emotional turmoil that the bizarre, unforeseen events exert on these well-drawn characters, played to the hilt by Pitt and Cotillard (as the glamorous femme fatale turned housewife who seems to have a dark and dangerous past.)

In yet another brilliant scene in this suspenseful and powerfully acted movie, Max compliments Marianne, "You're very thorough," to which she replies succinctly, "That's why I'm still alive." Tyrone's Verdict: B+