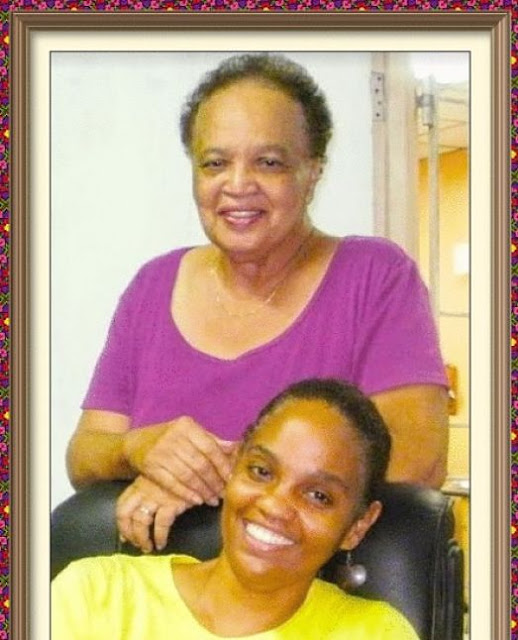 LIVING LEGACY: The hardworking mother-daughter pair reflect and look ahead. (Below) Anya at work in the costume department,.

As they gear up for the Boxing Day premiere of their latest musical comedy, The Upses and De Downzies Dem, TALLAWAH spends time with playwright-lyricist Barbara Gloudon and costume mistress Anya Gloudon talking about classic pantomimes, handling criticism, and their one-of-a-kind mother-daughter relationship.

On their personal favourite pantomimes: To say the least, Barbara and Anya Gloudon have fond memories of working on the annual production, including those extra-special shows they’ll never forget. “When we did Pirate Princess, with Leonie [Forbes] and Oliver [Samuels], it was so successful that we toured London’s West End and across the Caribbean. Trinidadians came to see it, the Eastern Caribbean came out to see it, and I think we even hosted a school from Tobago,” recalls Mrs. Gloudon. For Anya, the field trips and depth of research bring out the fun side of the pantomime experience. “For Pirate Jack, we went to Old Harbour Bay,” she remembers, “and I’ll never forget a scene with the pelicans and some dogs, while we were watching the boats come in.”

On the continued islandwide support: “Audiences come from as far as Negril and Port Antonio. The St. Thomas buses come every year. The school groups like Munro and St. Hilda’s come every year. What they like is that we provide entertainment for the whole family,” Mrs. Gloudon notes. Adds Anya, “We have this one group that comes in from Westmoreland every year and when they reach you know. They arrive in the morning, eat, freshen up and then watch the show.”

On handling the criticism: It comes with the territory, Mrs. Gloudon insists, but they’ve learned to take it in stride. “We get criticized all the time, and some of it has been very mean,” she says. “The work that we do doesn’t satisfy everybody, and we don’t expect that it will. But we continue to do the best that we can with the little that we have.”

On the Pantomime Company’s family atmosphere: The family that plays together stays together. Whether embarking on field trips or prepping for the big opening night, the Panto crew maintains tightly knit bond. Food and fellowship are key ingredients. “If we’re having a long rehearsal or a performance, we make sure that they have a meal, even if its soup and bread. On Pantomime Sunday, everybody gets their Sunday dinner – and the vegetarians are specially taken care of,” shares Mrs. Gloudon, a mother figure for the younger castmates. “We don’t have great sums of money, but we treat each other with respect and dignity.”

On nurturing talents that have become big names: “A lot of them got their start with us,” says Mrs. Gloudon, referring of courser to the dozens of local actors who have pantomime productions on their résumés. It’s a long list that includes Nadean Rawlins, Terri Salmon, Volier Johnson, Michael Nicholson, Karl Williams and Oliver Samuels, et al. “I have to make special mention of Oliver because no matter where in the world he is interviewed, he always expresses his gratitude to the Pantomime for moulding him.”

On their mother-daughter dynamic: Barbara and Anya Gloudon bicker, laugh together and regularly bounce ideas off each other. In other words, they’re the quintessential familial pair. What makes their relationship work so well? “Oh, she’s a horrible person,” Mrs. Gloudon jokes, to which Anya responds calmly, “I have to make sure I keep her on track.” Laughter ensues. See, they’re perfectly in sync with each other.

> PART 1: The Gloudons relish their roles as custodians of the Pantomime's history