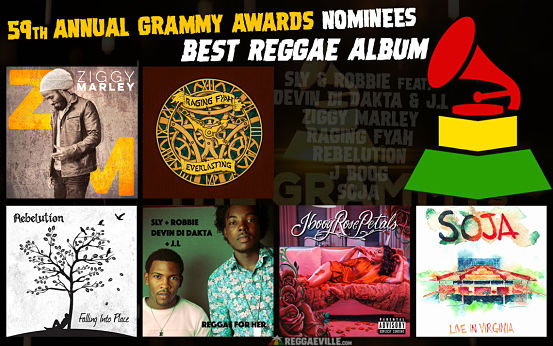 STELLAR SIX: This year's reggae field is a mix of veterans and up-and-comers.

ZIGGY Marley continues to show and prove that he's got the Midas touch when it comes to recording and releasing new music for the fans. His latest opus, a self-titled smah released by Tuff Gong Worldwide, has scored a nod for Best Reggae Album for next February's Grammy Awards, set for the Staples Centre in Los Angeles.

The complete list of nominees was revealed Monday night by the Recording Academy, which puts on the annual awards spectacle, honoring the year's top artistes and recordings, in a plethora of genres, with music's highest and most coveted prize - the golden gramophone.

As a solo artist and as frontman of the Melody Makers, Ziggy already has six Grammy wins under his belt, having been toasted for such stellar releases as Love is My Religion, Conscious Reggae Party and Fly Rasta. Morgan Heritage took home the award at the last show, the 58th ceremony, for Strictly Roots.

But as Bob's first-born goes after win number seven, he will have to get past some worthy contenders - five in total. Fast-rising roots-rockin' band Raging Fyah is up for their well-released latest effort, Everlasting (Dub Rockers/VP Records); Soja scored a nod for Soja: Live in Virginia (ATO Records); Rebelution made the cut with Falling Into Place (Easy Star Records); relative newcomer J Boog earned a mention for Rose Petals (Wash House Music Group); talented kids Devin Di Dakta and JL claimed the remaining spot, thanks to Sly & Robbie Presents... Reggae for Her (Tuff Gong International/Taxi Records).

Meanwhile, Beyonce leads the overall pack of nominees, with nine nods, including bids for Album and (Lemonade), Record of the Year ("Formation"), Urban Contemporary Album and Best Music Video, among others. Rap kingpins Kanye West and Drake picked up eight nominations each, with five going to Adele for her chart-topping album, 25.

Winners for the 59th Grammy Awards will be revealed during the Feb. 12 ceremony in Los Angeles. To see the full list of nominees, go to www.grammy.com.