LIFE IN THE FAST LANE: Insightful and revealing, I Am Bolt captures the many moods of The World's Fastest Man 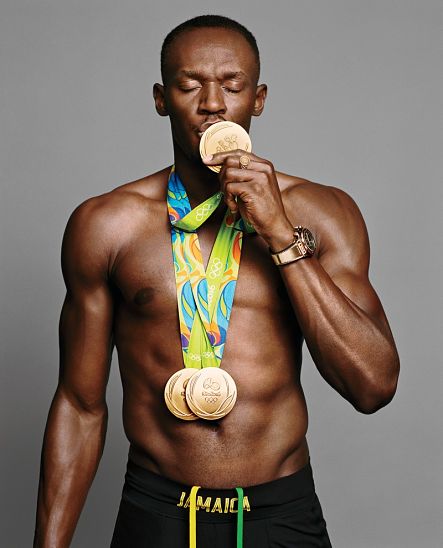 CHAMPION BOY: The must-see documentary peels back the layers of the 30-year-old phenom. (Photo: GQ)

PELE puts in a cameo appearance. So, too, does Serena Williams. And Michael "MJ" Johnson, Lord Sebastian Coe and Asafa Powell, among others. Sports world greats giving inspired testimonials about living legend Usain Bolt, the greatest sprinter ever and one of the most naturally gifted sportsmen the planet has ever produced.

The contributions from these renowned figures, especially Pele and MJ, lend added gravitas to I Am Bolt, the insightful, revelatory and wonderfully entertaining new documentary about the life and times of the World's Fastest Man, who holds the world records for the 100M and 200M sprints.

Directed by Benjamin and Gabe Turner, no strangers to documentary filmmaking, I Am Bolt peels back the layers of the 30-year-old phenom, revealing at the core an athlete and homegrown son of Jamaica who lives for the thrill of tough competition and loves having a good time. We see the hours of hard work (under the expert guidance of guru Glen Mills) that it takes to produce those fast times, the trouble with injuries, and the joy that comes with winning on the biggest stage there is: the Olympic Games.

Flashbacks to his early, coming-of-age days are made even more accessible thanks to interviews with his parents, Wellesley and Jennifer, two of his biggest cheerleaders. Candid reflections also come from longtime agent Ricky Simms and executive manager Nugent "NJ" Walker, who both served as executive producers on the project.

Meanwhile, the party animal in Bolt is unleashed at Trinidad Carnival and on outings with friends, where the cameras capture some vivid girls-gone-wild moments. So we see the light and the serious and the frivolous. The balance is commendable.

But we have to complain about the music selected for the soundtrack. With the exception of Damian Marley's exclusive track "Everbody Wants to be Somebody" and a few party-starting anthems from Popcaan and Vybz Kartel, the soundtrack leaves much to be desired. For the record, Chronixx and Ziggy Marley also appear in the documentary.

Still, as a whole, I Am Bolt is exactly what you expect from a big-screen feature about a fun-loving, big championship-winning sportsman like Usain Bolt whose remarkable life story is a testament to determination, dedication and the desire to win. Tyrone's Verdict: A-

ON THE COVER: Bolt talks to GQ about action clicks, the British press, and loving the country life