SHOPPER’S DELIGHT: After 12 years and counting, the Liguanea Art Festival inspires and satisfies 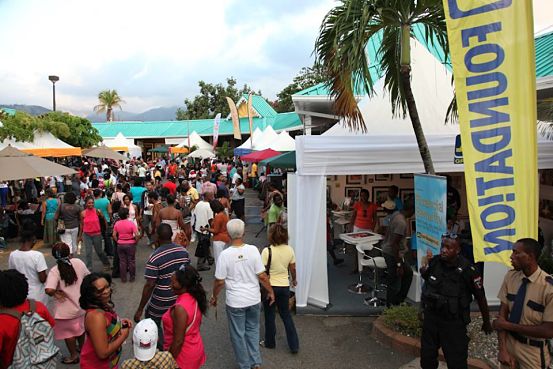 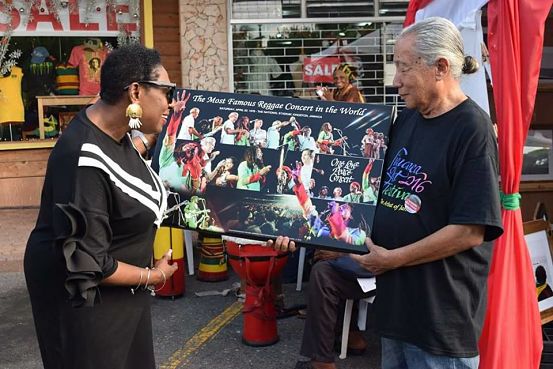 “I can’t leave my tent for a minute,” says Richard Atkinson, giving us a tour of his booth, chock-full of eye-catching artworks – his life-size sculptures and papier-maché creations. Atkinson was among the dozens of artists, artisans and other exhibitors who brought out their finest wares to showcase at Sunday’s 12th renewal of the Liguanea Art Festival at the Lane Plaza in St. Andrew.

As expected, the event drew a throng of patrons who got to interact with the artists, as they made their pre-Christmas purchases, enjoyed live drumming and other family-friendly activities.

For Atkinson, the event represents a boon for him as a struggling artist, putting hundreds of buyers directly within his reach. “I’m definitely impressed by the turnout. They should have it more often at this time of year. An event like this is important because we’re making money. I can’t leave my tent. You’re meeting a lot of customers and networking with other artists in a pleasant atmosphere. It doesn’t get any better than this.”

Of course, the Kingston native is not alone in his assessment of the art lovers’ extravaganza, which was last held at the Chinese Benevolent Association in 2014, took a break last year and has now returned to its original stomping grounds. “I missed it last year. Whenever you attend Liguanea Art Festival, there’s always so much to see. The best fine artists in Jamaica are here, but [the organizers] never leave out the children,” observes Carmen Williams, standing by the face-painting tent. “It’s something for the whole family.”

Twelve years ago, the festival first appeared on the scene as a mini art fair. For that initial outing, founders June Wong (right) and her photographer husband, Tony, invited only a handful of photographers and other artist friends to take part. A little over a decade later, it has evolved into the single largest outdoor arts-based event on the island, bringing together established and emerging talents.

Here are veterans Gene Pearson, Howard Moo-Young, Franz Marzouca, Craig Phang Sang and Laura Facey sharing the grounds with up-and-comers like Damian Cunningham and the Element Photography Club, a youthful bunch out of Portmore. If nothing else, it’s a brilliantly diverse marketplace to browse and shop at your leisure.

“It’s good when you take a break,” June Wong tells us, basking in the ambience. “From morning, it’s just been wonderful. People were coming in from 9:30 and we don’t open until 10. And as you can see, we got a good crowd. And the artists are just amazing. Our festival continues to attract the best.”

This year’s staging also benefitted from contributions by the National Works Agency, the Institute of Jamaica and the Jamaica Tourist Board. “The Tourist Board came on board fully this year,” June Wong notes. “They’ve always endorsed it, but this year they brought in some international journalists to cover it and help us with the publicity.”

What began as a hobby for Tony and June Wong, has now taken on a life of its own. “It’s now at a standard that we’re very proud of. We try to put a little sophistication to it and fix up the surroundings, so the artists and the patrons are comfortable,” she explains, before hinting that the festival’s next staging could be in May 2018. “It takes a lot of commitment, but the end result is worth it.”