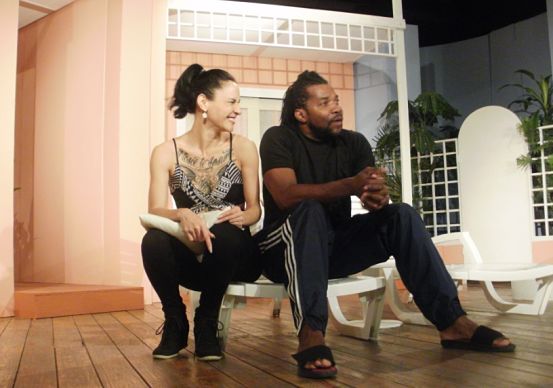 SIDE BY SIDE: Maylynne Lowe and Dennis Titus in Four Can't Play.

IF there’s one thing Jamaican theatre didn’t lack in 2016, it’s diversity. We encountered the icons (Garvey, MLK, Moses), got up-close with lovers grappling with challenges and embracing change, empathized with relatives laid bare by tragedy, and even found ourselves being won over by an unsightly hunchback with a heart of pure gold. In the end, we had to select the ten best of the lot. No easy feat, but we rose to the occasion. Here, in no particular order, are our picks.

Catherine Mulgrave: An African Odyssey
The University Players, once again under the expert guidance of Brian Heap, took us across the seas to the Motherland, during this sublime stage work, which explores a young girl’s journey to womanhood (Nadean Rawlins on her A game) and tackles themes ranging from history and memory to identity and self-discovery.

Woman Tongue
Bertina Macaulay, Hilary Nicholson, Carol Lawes, Barbara McCalla and Karen Harriott delivered some of the best work of their careers in this well-made revue (from late producer Scarlett Beharie) that wove a memorable tapestry of monologues, music and feline magic.

Women Who Roar
The Pantomime Company took a fresh approach to their annual heritage series with this oestrogen-spiked song-and-dance-and-drama celebration of iconic Jamaican who moved mountains and paved the way for future generations. Brava!

Frank the Freak
Fairytales with Jamaican flavour don’t get any better than this melodic, richly entertaining musical comedy from Jambiz Productions, with stellar performances from a cast led by Glen Campbell and Akeem Mignott.

I Lawah
Full of daring and defiance, this electrically charged School of Drama adaptation of Rawle Gibbons’ folk play crackled with a gritty exploration of harsh socio-economic realities of Caribbean society then and now, reeling us into a time and place both familiar and frightening.

Garvey: The Musical
Writer-director Michael Holgate brought his signature mix of storytelling mojo and lyrical fervour to this laudable re-telling of the Garvey narrative, affording us another dimension to the enigmatic icon about whom there’s always something new to learn.

Four Can’t Play
An ensemble dramedy with fireworks and razor-sharp bite is the most fitting way to describe this latest theatrical offering from Basil Dawkins and Douglas Prout, who elicit high-calibre work from the show’s quartet of actors.

Not My Child
Reuniting with Leonie Forbes (for the first time since 2014’s For My Daughter), writer-director-producer David Tulloch crafts a compelling portrait of domestic dysfunction, desperate measures and the ties that bind via this award-worthy work, co-starring Donald Anderson, Belinda Reid and Rosie Murray.

Across the Bridge
Boasting bravura turns and an ending that can move even the toughest cynic to tears, Tulloch’s Across the Bridge was 2016’s most deeply affecting show and a timely reminder that there’s no substitute for courage and a firm belief in the power of prayer.