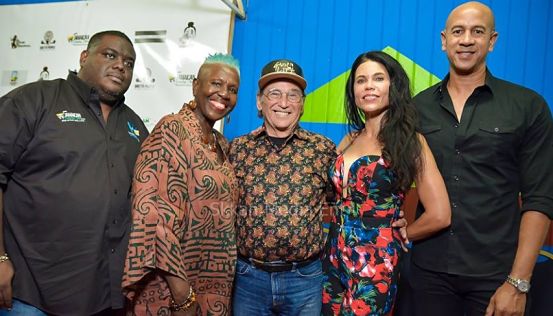 “People ask me why I left my great Hollywood career to come and work with Debra. It’s because she’s that good,” Joel Zwick told the sizeable crowd that flocked to the Jamaican Shopping Club Theatre in Kingston last Tuesday night for the launch of Cock Tales: Shame On Me, the new one-woman show from writer-actress and bonafide free spirit Debra Ehrhardt, who previously brought us the laugh-out-loud funny international sensation Jamaica Farewell, which established her as a powerhouse performer who can command the stage and carry an entire show all by her lonesome.

Zwick is the well-renowned director of the box-office-topping comedy My Big Fat Greek Wedding (with Nia Vardalos and John Corbett), a story the coincidentally also started out as a one-woman show by Vardalos. Between Zwick and Ehrhardt, who got introduced by Tom Hanks and wife Rita Wilson (both big fans of Ehrhardt’s work), the goal was to follow the same trajectory as Greek Wedding with the film version of Jamaica Farewell, which is still in the works. For now, the focus is on Cock Tales, which comes to Jamaica after a successful stint in the United States.

On the heels of Jamaica Farewell, it continues Ehrhardt’s exploration of deeply personal issues and experiences that she’s plucked from her reality and spun into thought-provoking theatrical fodder. But where Jamaica Farewell gave weighty issues an amusing spin, Cock Tales turns up the heat, mixing erotica and a sense of sexual liberation with broader universal themes.

By Ehrhardt’s own admission, the content (for adults only) is brutally frank and gets really visceral. In her own defence, she’s simply truth-telling. “We should never be afraid of or be uncomfortable with the truth. I’m a proud, very strong Jamaican woman, who’s been through some things that I’m sharing in this show,” she asserts. “I don’t regret anything I’ve been through. My goal when I’m up on that stage is to entertain people.”

While Jampro’s Zachary Harding predicts that Cock Tales will “ruffle a lot of feathers”, producer Michael Dawson of Whirlwind Entertainment feels the local theatre market is all the better for regularly introducing theatergoers to products that originated overseas. “We’re hoping that by bringing productions like [Cock Tales] down to Jamaica,” Dawson notes, “we can bring more diverse audiences out to the theatre.”