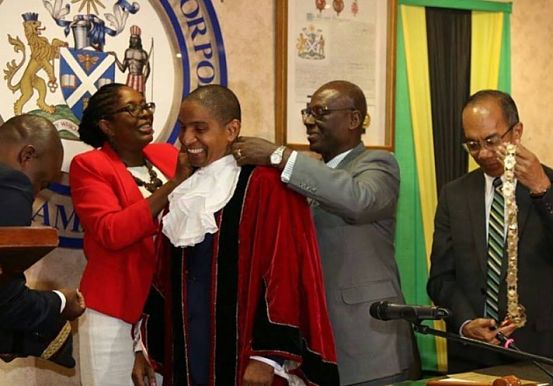 HIS WORSHIP: "Kingston is on the verge of greatness," declares Mayor Williams, who was officially installed on Dec. 15.

If newly installed Mayor of Kingston, Delroy Williams, has his way, the city of Kingston will be transformed into an economic and cultural superpower, akin to those in the First World States of North America and Europe, by the time he demits office. In a New Year’s message, issued on Sunday, Mayor Williams waxed optimistic that through sustained team effort and committed citizen participation, this longheld dream will be realized.

He has vowed to lead from the front. “As your mayor, I resolve, together with my team of councillors and administrative managers of the KSAC, to forge a new path in restoring and renewing peace, love, order, growth and development in our municipality,” said Williams, who takes over the post from Angella Brown-Burke. “I seek the support of all stakeholders, particularly you the citizens. Together, we will strive to make Kingston the pearl of the Antilles, a shining example of what a well-developed and managed city should be.”

The development of the Kingston Waterfront, enhanced cultural facilities and transformation of business and commerce infrastructure are among the key areas of focus for Williams’ tenure. “I am positive that Kingston is on the verge of greatness. Our goal is to promote economic expansion for the benefit of everyone, but this can only be achieved when there is an absence of the prevailing economic environment,” Mayor Williams pointed out. “Our mission is to transform the social, economic and cultural life of the city, including the renovation of our infrastructure, and spearhead increased investment in our human capital. Kingston will be great.”

TAKING CHARGE: The redevelopment of specific parts of Downtown Kingston and the upgrading of National Heroes Park (to include a Parliament building and a ‘Government Circle’ on lands surrounding the Park) are priority points on the mandate that has been given to newly appointed General Manager of the Urban Development Corporation (UDC), Dr. Damian Graham, whose tenure took effect January 3. Dr. Gordon, who held senior executive positions at JP Tropical Foods and Red Stripe prior to joining the UDC, holds an Phil from UWI’s St. Augustine campus and a Doctorate in Business Administration from Minnesota’s Capella University.