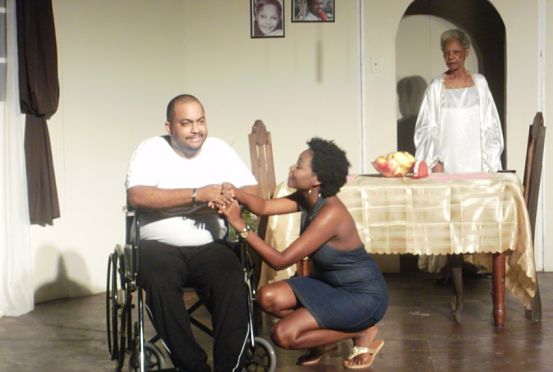 SHOW OF SUPPORT: Tulloch sharing a scene with costars Sabrina Thomas and Leonie Forbes in Across the Bridge.

“What was your favourite David Tulloch production this year?” Years from now that’s a question you’ll hear frequently in and out of the theatre fraternity. The golden boy of the Jamaican stage is all grown up, commanding the scene with productions that dually provoke and entertain his loyal supporters (and woo new fans), while holding up a crystal-clear mirror to the Jamaican society.

Without a doubt, Tulloch likes to explore big, important themes that resonate across the board (family, prejudice, pride, injustice), but as his ever-growing body of work indicates, he also has a taste for stories that disturb and ruffle the feathers of his viewers. (Risqué, anyone?).

These days his creative output is reflecting both sides of the coin – and he delivers the work (occasionally as writer-director-producer; occasionally as co-star) with relish. Consider last year’s one-two punch of Not My Child (an edge-of-your-seat drama) and 3some (a sexed-up romp) – two vastly dissimilar animals that unleashed pure theatrical Viagra.

At the same time, Tulloch’s star is increasingly on the rise. No longer the fleet-footed playwright-producer on the hunt for spaces to stage his work, these days the 36-year-old is occupying the resident manager’s chair at the new and improved Phoenix Theatre (formerly The Theatre Place) on Haining Road in New Kingston and adding to his business cred with the rollout of JamStage Productions, with partner Orlando Sinclair, to complement his 15-year-old enterprise Probemaster Productions which, in spite of the economic hardships, continues to advance from strength to strength.

On December 16, JamStage got the ball rolling with the premiere of its maiden production, Bad Breed, a fast-paced laughathon starring Michael Nicholson and Terri Salmon. But nothing could prepare us for the heartfelt, pitch-perfect Across the Bridge (opening a week later by Probemaster), in which Tulloch reteamed with his idol and theatre mother Leonie Forbes to treat theatergoers to something deeply moving – and end the year on a memorable high. Put another way, that’s how you bring the curtains down.

It remains to be seen what 2017 and beyond has in store for Tulloch – artist, father, husband, trendsetter – and what he has in store for us; how he’ll push himself creatively. What’s become abundantly clear? He’s not one to rest on his laurels.