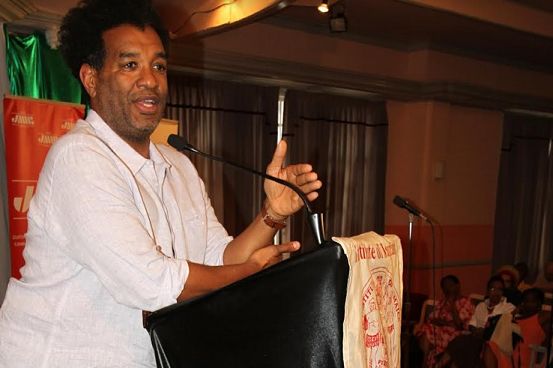 COLIN Channer has a confession to make: he is a direct descendant of a Jamaican obeahman, but he grew up with a no-nonsense mother who was anti-obeah, anti-pocomania and anti-Rasta. That’s just one of the many brow-raising declarations the acclaimed author and college professor made as he gave the keynote address during Sunday’s instalment of Grounation 2017 at the Institute of Jamaica (IOJ), speaking on the topic “Healing in the Balm Yard: Mento, Obeah and Other Jamaican Folk Forms and Culture.”

Laced with wit, keen observations, laugh-out-loud anecdotes and provocative food for thought, Channer’s lecture took a multi-layered, inter-disciplinary approach, thoroughly engaging a packed audience that responded with a standing ovation at the end.

Channer opened the two-hour-long presentation with an excerpt from his bestselling novel Satisfy My Soul, whose title was inspired by the classic tune from Bob Marley, on whose vast body of work Channer is currently teaching a college course back in the States (“Bob Marley: Lyrics and Legend,” a literary exploration of his music). He also drew on the work of Lee ‘Scratch’ Perry, Bongo Herman, Lord Sassafrass and Lloyd Lovindeer, among others, to better illustrate some of his points concerning roots and artistic identity.

Derek Walcott’s poem “White Noise” also came in for special mention, as Channer riffed on folk religion, kumina and jango, superstitions and West African-inspired traditions that will forever bind us to the Motherland.

But the crux of his presentation was a profound meditation on the controversial ‘use’ of black magic in the island, a practice that’s widely known yet regarded with much secrecy. “It’s a secret because it’s shameful, but it binds us to African spirituality,” observes Channer, who was taken to receive his first bush-bath, at age nine, from the peerless Modda Williams. “Jamaicans will say they don’t believe in obeah, but they deal with it on the down-low.”

Indeed, it’s a very complex relationship Jamaicans have with the practice that dates back to the slave plantation. But while Channer doesn’t glorify obeah, he feels all such practices that have endured with the centuries sprang from some necessity. “It’s the different kinds of knowledge and different kinds of practices that make us who we are,” he insists. “Jamaicans mostly use obeah as a prophylactic, for ‘just in case,’ but the stigma will never go away.”

For the record, the practice is illegal in Jamaica. But, according to Director of Public Prosecutions, Paula Llewellyn (Channer’s “big sister,” who’s known him for years), it’s seldom pursued in the court system. “The law against obeah still remains on the books. But in my 30 years, I’ve never seen a case brought by the police. They really don’t pursue prosecution in it,” Llewellyn noted during the Q-&-A that followed Colin’s presentation. “You rarely see it prosecuted, but obeah is alive and well. It is something we get accustomed to, especially in the rural parts.”

Meanwhile, Channer, who can remember being accidentally locked up in a fowl coop as a child, strongly believes the stigma attached to the practice in Jamaica might never lose that ‘taboo’ label. “I think the stigma attached to obeah is going to take a long time to go away, but part of that process of getting rid of the stigma involves the legislation that makes such a practice illegal,” he told TALLAWAH in a post-presentation interview. “Because obeah is illegal in Jamaica, our relationship with obeah is social. I think it should be presented as something neutral, something mystical.”

> Grounation 2017 culminates at the IOJ this Sunday with musician Carlos Malcolm in conversation with Dionne Jackson-Miller.