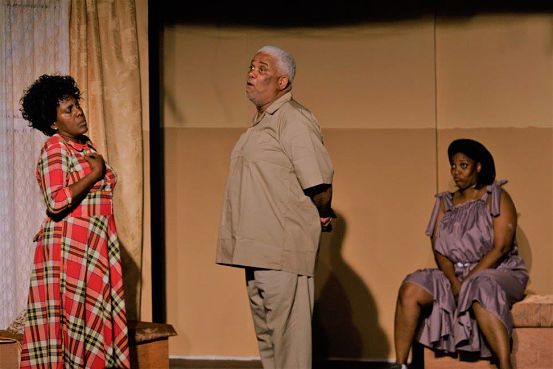 MAKING PLANS: Silvera, Johnson and Harris sharing a scene from the play.

DAHLIA Harris has always penned plays that are Jamaican to the core. The award-winning Back-Ah-Yard and Ole Fyah Stick leap readily to mind. But for her latest theatrical offering, she digs deeper, engaging with the opulent excesses of rural Jamaican family life and folklore, circa the 1950s, touching on the superstitious, some of the little-known customs and a few of the vintage traditions that still have their place.

And that’s one of the most appealing things about Country Wedding, a nostalgic and rib-tickling comedy-drama that, in spite of its shortcomings, transports and teaches, making the new and the archaic, the young and the old, dance together, with a bag of laughs, a little song-and-dance and some timely social commentary thrown into the mix.

It’s largely the story of Glenmore Watson (Kevoy Burton) and Bella Wendicott (Shantol Jackson), a pair of young lovebirds who arrive in Glenmore’s native Jamaican village of Grateful Valley, fresh from the UK, to find that the more things change the more they remain the same.

Boasting an accent that’s unmistakably British, Glenmore is welcomed with open arms by everyone, including such relatives and family friends as do-it-all woman-ah-yard Nella (Harris), his stern uncle Aaron (Volier Johnson) and Mabel, played by the tireless Deon Silvera and best described as a woman on a ‘quest’, serving as our narrator/guide on this never-a-dull-moment trek to a part of Jamaica not often showcased in the performing arts.

While Glenmore is showered with love, we can’t say the same for Bella, his future wife, who earns the ire of the people – and not just because of her ‘hoity-toity’ demeanour. She simply rubs people the wrong way. In her defence, however, Bella is somewhat misunderstood, coming across in certain solo scenes as an ambitious girl trying to escape a sad past. But, as Harris’ well-written script attests, the past has a way of catching up with you when you least expect it. And that goes for all the key characters in this show, who will remind you of someone you know.

Will Mabel finally find what or who she is looking for? When will Aaron and Nella give up their scheming ways? Will Grateful Valley ever see better days? And, with wedding bells in the air, can Glenmore and Bella find that elusive happily-ever-after against all odds?

This wouldn’t be a DMH production without a creatively designed set that comes alive under the bright lights. The mise-en-scene is especially resplendent in Act II, when the nuptials take centrestage, giving a fresh take on the idea of colour power.

As for the actors, Jackson and Burton are terrific. With winning chemistry, they make a believable and attractive couple. Stage vets Harris, Silvera and Johnson fit snugly into their roles, showing the youngsters and newcomers how it’s really done. By newcomers I mean Dacoda Mitchell and the Jamaica Youth Theatre standouts who round out the auxiliary cast.

Overall, Country Wedding is an enjoyable affair to which you’ll be glad you were invited. While it shies away from being a full-fledged musical (only a handful of tunes are performed), it delivers the pep and slice-of-rural-Jamaican-life appeal of a Pantomime, while retaining that entertaining edge you always get from a DMH production. Tyrone’s Verdict: B+