REAL TALK: It’s time to bring back the Jamaica Music Awards (the Jammies) 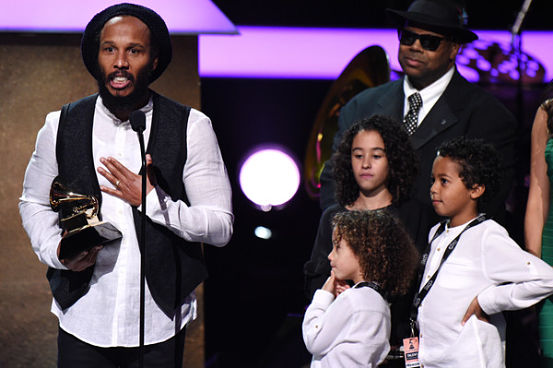 GIVING THANKS: Ziggy Marley (with his kids) accepting the award for Best Reggae Album at Sunday's 59th Grammy Awards in Los Angeles.

With awards season now in full swing, one can’t help casting a keen eye over the local entertainment industry and getting the feeling that something is missing: an awards show that celebrates the achievements of our most outstanding musicians of the past year.

True, we have the annual Youth View Awards (YVAs), celebrating its 10th anniversary with a star-studded bash at the NISC this weekend. But that’s for the kids. What about an all-Jamaican awards show for the grown folks a la The Grammys, which rocked Los Angeles this past Sunday night?

TALLAWAH checks reveal that back in the day, Jamaica did have such an awards ceremony, The Jammies, recognizing excellence in the music industry. But it eventually fizzled due to lack of sponsorship. Times have changed. I’m certain, with the right pitch and the requisite push, the show’s resurrection, or rebirth for that matter, would attract some corporate backing.

The team at JARIA does such an excellent job with the Reggae Month festivities each year. They could spearhead the planning and execution, in partnership with reps from the Ministry of Culture and Entertainment and those hard-working troopers at the JCDC. A total team effort, buoyed by some voluntary contributions, would certainly get the job done. Scores of young people, college kids in particular, would be willing to pitch in and help free of cost.

Roots reggae, dancehall, reggae-soul, gospel, soca, alternative, even jazz. Our entertainers continue to churn out terrific sounds in these genres/sub-genres year in, year out, often via their own meagre resources and with little or no recognition for their efforts.

What wonderful encouragement, the Jammies would offer to keep them productive and competitive, as they seek to challenge themselves creatively – especially the plethora of talented new artistes, taking cues from the veterans, who exude international appeal and have something meaningful to say.