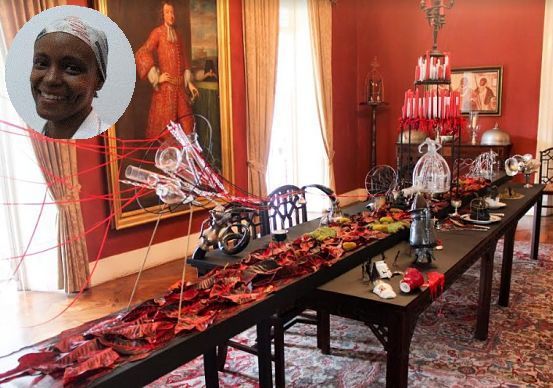 VISUAL FEAST:  “The work is a celebration of the absolute resilience of the Jamaican people,” the artist (inset) says of her prize-winning opus.

IF you ask Jasmine Thomas-Girvan why she decided to become a full-time fine artist, her answer will be very simple: she doesn’t have a choice. “I feel it is my duty to create art. I feel it’s something I was called to do. As an artist committed to the work, it’s not easy but it has to be done,” she admits, standing inside the National Gallery on the occasion of the grand opening of the 2017 Jamaica Biennial exhibition. “For me, art is a trigger. If somebody is moved by what you have created, you have achieved something.”

And her work is certainly very moving. In fact, the Biennial’s judges were so taken with her larger-than-life entry “Parallel Realities Dwelling in the Heartland of my People” that she was awarded the prestigious Aaron Matalon Award (for the second time in her career), besting a large crème-de-la-crème field that included such other stalwarts as Laura Facey, Petrona Morrison, Norma Harrack and David Boxer, to name only a few.

By her own admission, Thomas-Girvan’s life-long devotion to the creative and visual arts runs deep. “I believe art is supposed to provoke you, move you, make people react. Some of us take that responsibility very seriously. Sometimes there are no accolades, no financial reward. But if what you do creates change, that’s the reward.”

Currently living and working in Maraval, Trinidad, Thomas-Girvan is a daughter of St. Andrew who, having been educated at the Parsons School of Design in New York (completing a BFA in Jewellery and Textile Design), has exhibited her mixed-media creations everywhere from the US mainland to Venezuela to the Caribbean. Her hyper-innovative art is described by the National Gallery’s curators as “work that evokes poetically the epic histories of the Caribbean.”

Thomas-Girvan, now 56, is quick to repay the compliment. “The National Gallery has to be commended for the extraordinary energy they bring to this space. It is important that the work we are creating as artists is given the recognition it deserves. The art community deserves to have an audience because without an audience we are really speaking to each other. So I have to big up the National Gallery and the Institute of Jamaica, as well,” says the artist, whose many awards include the Tiffany Award for Excellence at Parsons, the Commonwealth Foundation Arts Award in 1996 and a 2014 Silver Musgrave Medal from the IOJ.

Comfortably dressed in a sleeveless little black dress and a head wrap reminiscent of Erykah Badu, Thomas-Girvan says her Jamaican roots are never far from her thoughts. To wit, it’s a never-failing source to draw from. “Parallel Realities”, she says, confirms this. “The work is a celebration of the absolute resilience of the Jamaican people,” she tells TALLAWAH. “There’s a counter-narrative to that, but I wanted to reflect a powerful aspect of my Jamaican heritage.” Mission accomplished.

For the record, the artist whose next show is the Casa de las Americas exhibition in July, has nothing but high praises for the home-based artists who continue to churn out quality work, in spite of very little resources. “From what I’ve seen, there’s a diverse representation of Jamaican art here. And the output seems to be of a very high standard,” she observes. “It shows that the art culture is growing and the community that supports art in Jamaica is growing. The key is to improve on what we have.”

>> Report: TALLAWAH takes a look at the 2017 Biennial exhibition