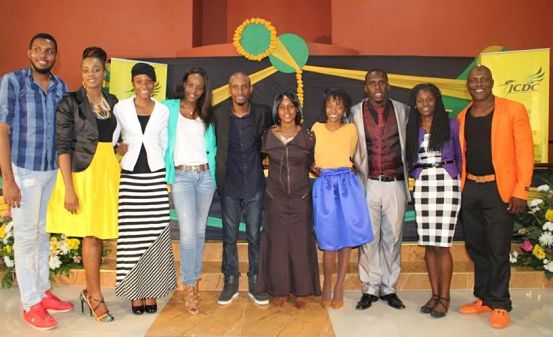 ALL FOR ONE: This year's top 10 share a group shot following the big announcement.

A stellar batch of ten contestants has made it into the final round of the 2017 Jamaica Gospel Song Competition. They were chosen after weeks and weeks of auditions, elimination rounds and the recent semi-final showdown, where the judges selected the top ten from a pool of 23 impressive entrants.

They hail from parishes all over the island. Clarendon is represented by Dannareo Fearon (“Order My Steps”, Shanoya Haley (“The Blood”) and Vylmark Hamilton (“Too Late”). Manchester natives Chevanese Thomas (“Through the Storm”) and Derona Nunes (“God Is Real”) also made the cut. Kingston & St. Andrew-based singer-songwriters Tevon Brown (“Christ Put a Praise In Me”), Dycinta Nunes Holgate (“Bawl Out”) and Flavia Bradshaw Beswick (“Hold the Faith”) also impressed the judges, as did Raheim Betty (St. Ann), with “Jesus, I’m Sold Out To You” and Portland’s Shaughna-Lee Steele with “Arise.”

Now in its third decade, the Jamaica Gospel Song Competition, run by the Jamaica Cultural Development Commission (JCDC), continues to unearth, showcase and nurture promising talents performing music that reflects our firm gospel roots mixed with indigenous sounds. Staying true to the tradition of excellence, the finalists all brought their A-game to the competition, setting the stage for an electrifying finale that will unfold during this summer’s #Jamaica55 Emancipendence celebrations.

“This year’s impressive crop of finalists each brought something extra to the competition in their own unique way. It was hard for the judges to select the best ten,” admits the JCDC’s Stephen Davidson, who feels the competition is growing from strength to strength. “The Jamaica Gospel Song Competition facilitates growth in the music industry and continues to provide opportunities both locally and internationally for a lot of persons, even those who were not the winner on the final night.”