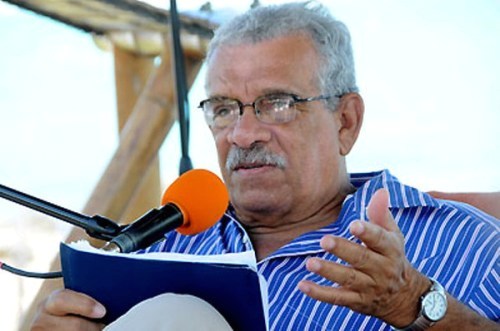 WORDS TO LIVE BY: The Nobel Laureate addressing the crowd at the Calabash Literary Festival in Treasure Beach in 2008.

Among the elder statesmen of West Indian literature, Derek Walcott was the gold standard. A patriotic son of St. Lucia, he easily stood out among his peers (Naipaul, Selvon, Brathwaite and Lamming) in the pantheon reserved for the literary giants of the region. That’s why his death is so deeply felt. And not just among the literati. Poet, playwright, scholar, thinker, fine artist, Walcott inspired a whole generation of young and emerging talents regionally and globally. Like Rex Nettleford of Jamaica, his is a legacy that’s as larger-than-life as the reputation that preceded him.

Born on January 32, 1930 in Castries, Walcott – the son of a schoolteacher mother and a writer/painter father – made his transition on Friday after a period of ill health. His longtime publishers Farrar Straus & Giroux made the announcement, sparking a wave of tributes and lengthy newspaper obituaries. He was 87 years old.

Though his oeuvre includes such classic plays as Dream on Monkey Mountain and Ti-Jean & His Brothers, Walcott’s name has become synonymous with evocative poetry that sings of Caribbean rivers, green nights the legacy of our colonial heritage and our unseverable ties to the Motherland (“How can I turn from Africa and live?”, A Far Cry from Africa). The Fortunate Traveller, Omeros, Another Life, and The Prodigal are just a few of the collections that leave readers in awe at home and abroad.

Jamaican admirers have been fortunate to have audience with the celebrated wordsmith at readings and book signings over the years, most memorably at the Calabash Literary Festival at Jake’s in Treasure Beach in 2008 and at a standing-room-only symposium at the Knutsford Court Hotel in New Kingston in 2012.

Walcott’s life was a fascinating study of contours and contrasts: the sublime poetry, plays and paintings; the Oxford scandal that sorely tested his mettle; his critics and biographers who’ve done their best to capture his truth (Jamaica’s Eddie Baugh among them); the artists who’ve immortalized him and, of course, the career-defining Nobel win in 1992, making him the first Caribbean native to be awarded the highly coveted Literature prize.

“The Nobel Prize brings a lot of responsibility. Your life becomes very active. There is so much demanded of you, and it’s almost like a torment,” he confessed to his Kingston audience in 2012. “It’s like saying ‘I won? Wow! And then saying ‘Oh Jesus. I won!’ I’ve never said that. But it can be very exhausting. In that way, I guess it does change your life because it make you be at the call of people who want you to read at events like these, and so on.”

Some of us were born to sing, some to till the soil, others to heal the sick. Walcott always knew he was here to write. “I knew from the time I was a child that that was what I wanted to be. I wanted to be a poet, and given that my mother was a teacher and my father was a writer and painter,” he said. “So I knew my vocation and I’ve always considered myself lucky because I knew exactly what I wanted to do from age six or seven.”

From the TALLAWAH Archives:
>Walcott in Kingston: On the writing life and the Nobel Prize
>‘I’m Disappointed’: Walcott responds to Oxford hoopla