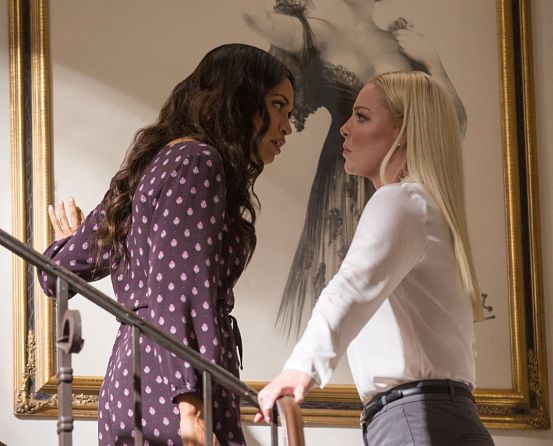 THE WOMEN: Dawson and Heigl square off in this scene from the new thriller-drama.

FOR any Hollywood actress worth her salt, there comes a time when you have to shed that America’s Sweetheart image and show some toughness and brawn, real depth and range. Julia Roberts, Reese Witherspoon, Anne Hathaway – they’ve all been there.

In this month’s Unforgettable, Katherine Heigl (known for such laugh-out-loud romps as 27 Dresses and Knocked Up) steps up to the plate, taking a dramatic departure from her signature roles to turn up the heat as Tessa Connover, an unhinged divorcée going to extremes to ruin the life of her ex-husband’s new flame, Julia Banks (played with enormous warmth and vulnerability by Rosario Dawson), an editor who leaves the big city for a fresh start in a small town with a gorgeous man (George Stults as David Connover) and his young daughter, Lily.

Directed by Denise di Novi, working with a script by Christina Hudson, Unforgettable is no Fatal Attraction, but it is frequently jolting and utterly realistic, compellingly recalling such predecessors as Obsessed (Beyoncé Knowles and Ali Larter squaring off over Idris Elba) and the more recent When the Bough Breaks, where Regina Hall and newcomer Jaz Sinclair had their knock-down drag-out brawl over Morris Chestnut.

Exploring regret, heartbreak and the pain of moving on, it’s about a woman with an abusive past desperate to put that past behind her, but it’s also a reminder that hell hath no fury like a woman scorned. Even so, it’s Heigl’s startling transformation into the ice-queen Barbie with a perfectionist streak that proves most unforgettable. Tyrone’s Verdict: B