LIGHT ON THEIR FEET: Praise Academy serves up rhythmic, rapturous 2017 season of dance 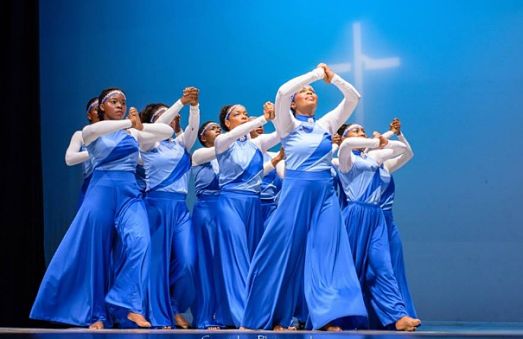 INTO THE BLUE: The company's works combine interpretive worship with dance theatre.

THE parable of the five wise and five foolish virgins, brought to life by the rousing choreography of Robertha Daley’s “Be Ready”, vivid lighting and Dean Fraser’s nicely textured rendering of “Amazing Grace” on sax, was among the numerous highlights of Praise Academy of Dance’s 2017 season, a series of nearly 20 works steeped in soul-stirring gospel, youthful exuberance and the company’s signature exploration of testimony, interpretive worship and Christian ministry, with traces of secular influences.

While Oniel Pryce’s engrossing “Unconditional Love” brought uniformed movements by black-clad performers to the stage, Nicole Bain’s “The Plea” (anchored by an all-female ensemble of talented teens) won us over with its unbridled energy and meditation on forgiveness and transformation. Brittani Clarke’s “My World”, driven by selections from the Kirk Franklin repertoire, was just as captivating.

But the audience’s most vigorous applause was reserved for the simplistically gorgeous “Almost Home” (also choreographed by Daley), set to Mahalia Jackson’s lush vocals; Alicia Watson’s “Insight” (a prayerful sky-blue delight); Nickeisha Jones’ military-inspired “Stand Out” (giving new meaning to Christian warrior) and Daley’s “We Fall But…” (featuring seven females and one male) exploring the life-changing power of learning from one’s mistakes on the Christian journey.

While a few intervening pieces lacked the spark and bold originality of the show’s best offerings, Artistic Director Patricia Noble and her team succeeded admirably in delivering a balanced overall package, culminating in a super-strong finale. Freddy Moore (a veteran of North America’s Footprints Dance Company) supplied the movement for the robust and resolute “Walk in Jerusalem,” which preceded the big ‘Finish Line’ spectacle that brought the entire Praise Academy corps on stage for a truly dazzling and celebratory curtain-closer.

Long story short, Praise Academy of Dance (on the eve of their 25th anniversary!) knows how to fuse motion, message and stage magic into an entertaining whole. What’s more, the enjoyable and enlightening 2017 season proves that their commitment to craft and ministry is bearing succulent fruit.