ALL IN THE FAMILY: Oliver and Volier stir up trouble and a bag of laughs in frank and funny Frenemy 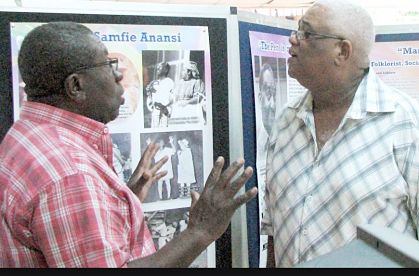 TWO OF A KIND: The living legends win over the crowd with consummate ease in their latest theatrical outing.

THEY say keep your friends close and your enemies closer. How about “keep your frenemies closest”? You are bound to agree with such a sentiment after watching Frenemy, the laugh-out-loud new comedy-drama, written and directed by Oliver Samuels, that tackles some serious family-related issues.

The production, playing at Kingston’s Jamaican Shopping Club Theatre, marks Samuels’ first on-stage collaboration with veteran co-star Volier ‘Maffy’ Johnson in well over a decade. The result is a nostalgic and well-made theatrical production that occasionally shows its stitching, but it’s such a welcome and refreshing two hours of entertainment that you can hardly dwell on any minor flaw.

It bears repeating that the show is chock-full of enough hilarious moments to stone dog, but Samuels expertly manages to blend the humour with sobering commentary on family ties, vengeance, prejudice and the meaning of true friendship. Fred (Samuels) and Willy (Johnson), now fully grown men, have been bros since boyhood and like fraternal brethren, they’ve had their ups and downs, quarrels and fights. But they’ve always recovered and moved on. This time around, that’s easier said than done.

Fred is about to bury his dearly departed wife Mildred, so Willy is visiting “from Amerkah”, staying at the house that Fred shares with his adult son Carl (Dennis Titus), a computer technician, and Carl’s girlfriend, Rose, nicely played by Lakeisha Ellison, an actress who continues to evolve beautifully.

A proud, self-important type, Willy loves his food and his women. But he has a history of getting into hot water because of the opposite sex, so it comes as no surprise that Rose quickly catches his eye. When he puts the moves on her, his actions set in motion a sequence of events that climax with the kind of shocking revelations that could permanently destroy Fred and Willy’s decades-long friendship. Really shocking stuff.

It’s a realistic, deeply resonant story populated by people you recognize almost instantly, reaffirming Samuels’ gift for capturing the essence of Jamaicanness in his work. What’s more, with him firmly planted centrestage, the big laughs just keep on coming. When Fred and Willy are not engaged in a verbal tussle, it’s Fred and Rose who are going at it, as Fred is convinced that his daughter-in-law (whose culinary shortcomings, etc, is major cause for concern) is not the right fit for his son.

Even so, the lively cast reminds us that nothing brings a family closer together than a crisis that forces you to reassess your priorities and count your blessings. The apt set design and vivid lighting add to the show’s overall appeal.

Today’s emerging Jamaican thespians can learn a thing or two from Johnson and Samuels about longevity and maintaining craft and professionalism (perfectionism, too) in the face of the advancing years.

With Frenemy, they easily reconnect with each other (and their longtime fans). Like true originals, they make it clear that when it comes to showbiz, there’s no substitute for experience and staying power. Tyrone’s Verdict: B+