CUT TO THE CHASE: Baby Driver takes you on a wild, unforgettable ride 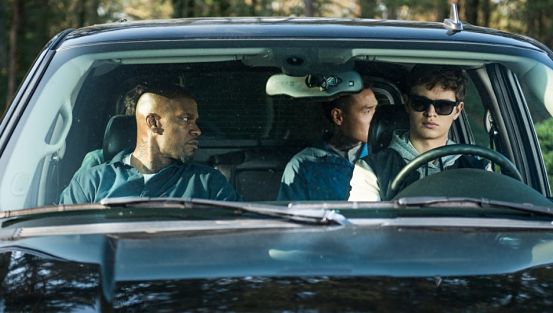 VA-VA-VROOM: Elgort (alongside Jamie Foxx) is the real deal behind the wheel.

COUNTLESS movies have been made about good kids who fall in with the wrong crowd and almost have their lives snuffed out when push comes to shove. Add to that long cinematic list Baby Driver, a smart and stylish heist drama that revolves around young heartthrob Baby (Ansel Elgort), a foster kid now all grown up who gets drawn into the criminal lifestyle with near-fatal consequences.

You feel for Baby (played to an impressive tee by Elgort), a likeable chap who lost his parents in a terrible car crash when he just a toddler. While in the care of his deaf-mute foster dad, he comes under the sway of Doc (Kevin Spacey, superb), a crime boss who shows him the ropes of the criminal underworld and puts him behind the wheel of the getaway car whenever they go on “jobs.”

It’s a motley crew of society rejects that Baby is stuck with – including alpha-male bloke Buddy (Jon Hamm) and his tought-cookie sweetheart Darling (Eiza Gonzalez) and the ruthless bats, played with frightening menace by Jamie Foxx.

Baby, who is never without his iPod and favours the oldier-but-goodies, stashes the cuts he receives from these jobs in the apartment he shares with his aging foster dad, but he desperately want out to pursue a better life. He’s more determined than ever to move on when he meets Debbie (Lily James), a sweet, easy-to-talk-to waitress who gets him. She even shares his love of good music and also longs to escape the confines of her mediocre life.

They make plans to go away together, but when Doc pressures Baby into doing one last job, the best-laid plans go up in smoke and their lives may never be the same. Wright is a competent storyteller who has crafted a series of well-developed characters populating an intriguingly spun story in an all-around well-paced film.

All of the actors turn in solid work, but none more so than Elgort (The Fault in our Stars) whose leading-man credentials gets a solid boost with his fine starring work here. Whether he’s taking the cops on a wild goose chase or pouring his heart out to his new lady love, we are witness to a talent in full bloom.

Equally thrilling and touching, emotional and entertaining, Baby Driver takes you on an unforgettable ride. Tyrone’s Verdict: B+

Email ThisBlogThis!Share to TwitterShare to FacebookShare to Pinterest
Labels: Ansel Elgort, At The Movies, Current Cinema, Flick of the Week, Jamie Foxx