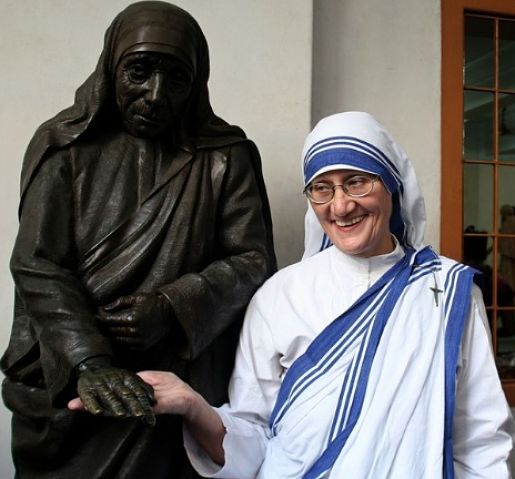 TEAM LEADER: “Jamaica has the potential to accomplish great things,” says the Superior General, who is on her first visit to the Caribbean.

AT the end of the service, members of the small congregation wasted no time going up to her, with their toddlers in tow, for a special blessing. Those with camera-ready cellphones whipped them out, eager to snap pics for friends and family back home.

In short, a warm reception greeted Sister Mary Prema Pierick, the Calcutta-based Superior General of the globally celebrated Missionaries of Charity (the sisterhood famously started by Mother Teresa), who was the guest of honour at a special mass at Sts. Peter & Paul Church in Liguanea on Wednesday evening.

Sister Pierick has been in the island since Monday, visiting with local members of the sisterhood, in communities across Kingston, to see the work they have been doing in fulfillment of their sacred duties.

As Sister Mary tells TALLAWAH, her first visit to Jamaica has been a pleasant one. “I’m very happy to be here. I’m very grateful. I’m happy with the work that the sisters are doing, and I see that they are happy working here,” she said, flashing a warm and disarming smile. “I’m grateful that the Archbishop could be so kind to offer this special mass for me.”

She’s referring to Most Rev. Kenneth Richards, Roman Catholic Archbishop of Kingston, who led Wednesday’s reflective service. “Her visit is significant because this is her first visit to Jamaica and the region. It is customary for the sisters in India, as an international order, to visit parts of the world where they have houses,” the Archbishop noted. “And the fact that she is a successor to Mother Teresa makes her visit very special.”

At 64, Sister Mary Prema Pierick has been serving as Superior General for the past eight years. She noted that while the work being done by Missionaries of Charity’s local arm is laudable, there is room for improvement. “We are discussing to see what can be done to increase the efforts of the sisters,” she told us. “Jamaica has the potential to accomplish great things. Mother is helping us, so we are confident.”

Sister Pierick, who handed out small Mother Teresa mementoes at the end of Wednesday’s mass, will visit the house based in Balaclava, St. Elizabeth, later this week, ahead of her departure for India on Sunday.