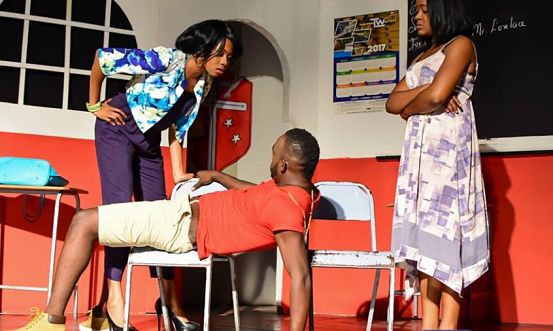 It’s that time of year again, when we jump-start our countdown to theatre’s biggest night (the Actor Boy Awards) and its precursor, the Thespian Spirit Awards (aka the Thespies), now heading into its eighth year. This week, we highlight five strong leading-lady contenders who could see their names on the Best Actress ballot in the New Year.

Neisha-Yen Jones in White Skin, Black Heart
As Kerry, a young woman who finds love and a new lease on life after a job loss, to see it all subsumed by ex-wife drama, Jones gives a revelatory performance (in her debut stage role in local theatre), proving that her much-buzzed-about success on London’s West End and on Broadway was no fluke.

Angela Jarrett in Wine & Roses
We hadn’t seen her in action in quite a while, but her return was well worth the wait. Jarrett delivered as a hot-to-trot cougar whose eager-to-please paramour Jonathan (Ackeem Poyser) gets too clingy, while her estranged husband Edgar (Michael Nicholson) tries to worm his way back into the picture. Jarrett owns every scene she appears in.

Dahlia Harris in Dat a Gwaan Jamaica
No stranger to the down-to-the-wire race (she’s taken home awards for Judgement and Concubine?), Harris brings authority and hilarious characterizations to the portrayals she gives in this clever dancehall comedy revue, which she also wrote, produced and directed with sterling results.

Sakina Deer in The Matey Chronicles
Hands down, it’s one of her most courageous turns to date. After playing housekeeper Munchie in Frank the Freak, Deer turns up the heat as Lola, a restless mistress who is tired of being the woman on the side. She wants her prominent married lover (Courtney Wilson) to choose between her and the wife (Sharee Elise). With Deer serving a peppery sauce, the scandalous affair brings heartbreak – and spawns a juicy blog that puts the gossip mill into overdrive.

Renae Williams in Wah Sweet Nanny Goat
Having demonstrated considerable range via such star-making vehicles as Saving Grace and 70X7: The Real Truth, Williams was on her A-game as she brought to life Janet, a devout Christian and single mother whose long-buried secrets come back to haunt her. It’s a meaty, gratifying role that confirms Williams’ leading-lady bonafides.