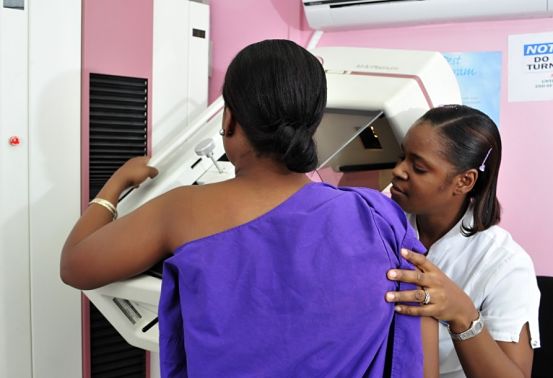 KEEPING ABREAST: Women in the high-risk group are advised to start doing their mammograms before age 40, advises Gordon.

AT least two new cancer treatment centres are set to be opened locally by early 2018. That’s the word from Executive Director of the Jamaica Cancer Society, Yulit Gordon, who says the society is stepping up efforts, in collaboration with partners islandwide, to bolster the fight against the deadly disease.

“One of the new treatment centres will be opened at Cornwall Regional between late December and January. The other one is a work in progress at St. Joseph’s Hospital here in Kingston, and it should be completed and ready to be opened by early next year,” Gordon said, speaking with TALLAWAH at Sunday's symposium at the Jamaica Pegasus Hotel, in observance of Breast Cancer Awareness Month. “The advocacy work continues. We continue to lobby the government for new treatment centres, and we give thanks that we’ve been able to expand our work in this area.”

At the same time, Gordon laments the ‘demise’ of their old-faithful mobile mammography unit, whose absence has left a huge void. “That unit was instrumental in our serving women in rural and underserved communities. When it was up and running, it did about 2,000 mammograms each year. So we are appealing to the relevant authorities to help us replace it.”

The cost to replace the mammography unit (which they had for 14 years), Gordon said, falls somewhere between J$80M and $100M. “The JCS intends to continue its extensive work at the community and corporate levels. One recognizes the prevalence of cancer in the Jamaican population and the high number of premature deaths due to late-stage diagnosis,” she says. “So we still have much work to do in the areas of early detection and screening.”

Gordon says it cannot be emphasized enough the supreme importance of Jamaican families keeping their eyes wide open when it comes to fighting The Big C. “We want to make an appeal to all Jamaican women to be very vigilant in performing their monthly breast self-exams and to access their annual clinical exams and start their mammograms by age 40,” she advises. “Those in the high-risk group, meaning they have relatives who have been diagnosed with breast cancer, or they have a history of the disease in their families, need to start [their mammograms] earlier.”

> How far advanced is The National Cancer Plan?
“It’s in the works,” says Dr. Lindberg Simpson (Head of Surgery, Kingston Public Hospital), who reminds us that in 2007 Jamaica became a signatory to the Treaty of Port-of-Spain, which had regional heads of government agreeing to pay special attention to non-communicable diseases, including cancer. Jamaica’s National Cancer Plan won’t come into effect anytime soon, Simpson says, as a long process is due to precede any such implementation. But, “I think [the plan] is absolutely necessary. We’re seeing too many patients with aggressive forms of the disease at an advanced stage. So I would like to see the plan developed,” says Dr. Simpson, “and it’s very important that it becomes accessible to the public for there to be greater awareness.”