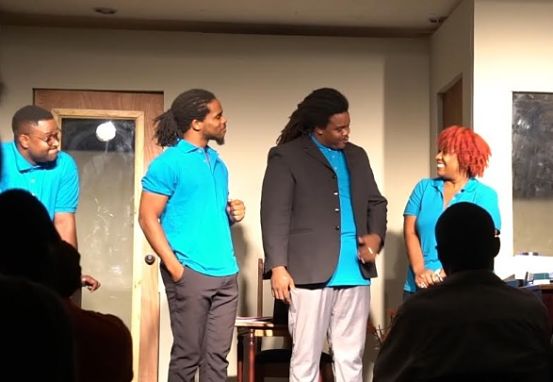 WORKING 9-TO-5: Drysdale, McFarlane, Crossgill and Hinds-Furzer play co-workers in the new comedy-drama.

CAN’T we all just get along? Getting ahead in a tough work environment is not for the faint of heart. It’s survival of the fittest – and the smartest. Gloria Ellington (Dawnette Hinds-Furzer) learns this the hard way, having to grapple with the demands of her job as supervisor, hard-headed colleagues and the romantic yearnings of her soft heart.

She is the central character in Mature Attraction, a humorous, reasonably satisfying comedy-drama that dives head-first into office politics, affairs of the heart and the age factor.

Penned by newcomer Kevin Jones and directed by David Tulloch, the play (set at a faming needs company), forces us to ponder how relationship dynamics in the workplace can ultimately determine rapport and personal growth. But it also highlights the fact that, in spite of the professional environment and the ethics that go along with it, we are only human with deep-seated urges, wants and needs.

With her portrayal of Gloria, Hinds-Furzer is superb at zoning in on an upstanding, respectable middle-aged woman’s dilemma. She wants to channel her efforts into the job and be a sterling leader for her colleagues. But how does she cope when her boss, Mr. Rogers (David Crossgill, very commanding) starts putting argument to her, creating an awkward, uncomfortable scenario?

When a new office manager, the strikingly young and attractive Keith Cole (Ricardo McFarlane), joins the team, he too starts putting the moves on Gloria. Poor Gloria. As you can imagine, Mr. Rogers is green with envy, red with rage, when romance starts to blossom between his two workers. You know the fireworks are only a few scenes away. 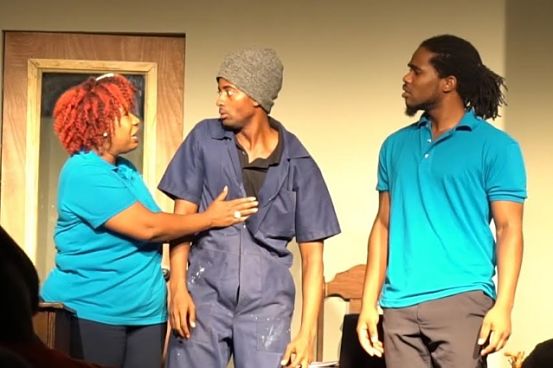 The rest of the cast is just as ‘fascinating.’ Sabrina Thomas, showing increasing versatility as she builds a body of work, steps into the role of hot-to-trot receptionist Vanessa who, sadly, favours sex appeal over brain power. In spite of her obvious shortcomings, physically challenged handyman Dwight (Ackeem Poyser), who works in storage, has made her the apple of his eye. Dwight is drawn to Vanessa like magnet to steel, but he’s frequently getting into scrapes with the others, who he says grudge him for his “looks and street smarts.”

Meanwhile, Shaun Drysdale plays nerdy accountant Reggie, who is a tad suspicious. Is he the one behind the mysterious disappearance of several cheques from the office files?

All in all, it’s a feasible plot that’s sufficiently hefty on the meat. Jones is a promising writer who clearly had fun crafting these colourful folks. If only we could have had a bit more backstory on the characters to better understand their motivations. Still, Jones finds an ideal collaborator in Tulloch who, as a seasoned director of ensembles, knows how to bring out full-of-life performances from his cast.

At the same time, the humour is ample and nicely balances the dramatic tension. Lighting and set design get respectable grades.

As Gloria’s story emphasizes, the office can be a minefield to be navigated with the utmost vigilance and precision. You want to safeguard your job but sometimes it’s your heart that needs protection. Tyrone’s Verdict: B