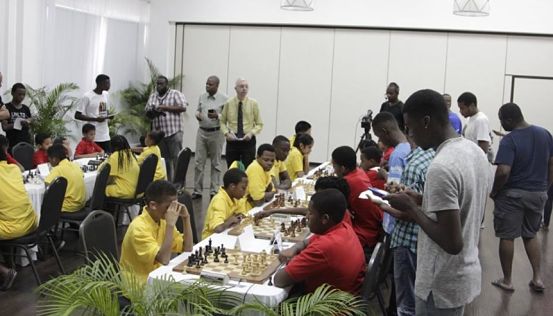 WE’RE all accustomed to the horse-racing, basketball and football kind, but have you ever heard live commentary for a chess match? That was one of the bonafide highlights at last Sunday’s Rapid Chess mini-tournament, which brought the curtains down on the inaugural Jamaica International Chess Festival at the Worthington, Spanish Court Hotel.

A stadium-like spectator atmosphere – complete with stands and live digital boards on jumbo-sized screens – got the patrons in on the action as the trio of commentators, led by Jamaican grandmaster Maurice Ashley offered their expertise. In the adjoining room, quieter than the Library of Congress, the young players with eyes glued to their chess boards are deeply focused (concentration overdrive) as they plot their next move. It’s a showdown between the Dark Knights and the Raging Rooks (made up of national champions and visiting child prodigies and other international guests).

Two rows of tables are neatly arranged, as the red and yellow-clad teams launch into the fierce battle. If a pin drops you can hear it. Back in the main room, where the trophies to be presented grab your attention, the spectators/supporters (parents, friends, chess community members, members of the public) watch the screens. “It’s the first time we’re seeing this format in Jamaica, with the live digital boards, where we can watch and get live commentary,” says organizing committee member Rowena Coe. “The aim was to make it spectator-friendly.”

So it was. The kids were the stars of the show. Among the day’s participants were Zaina O’Connor (National Under-8 girls champion), Cameron Coe (Under 8 Absolute Champion), Kishan Clarke (Under 10 male champion), Laila Griffiths (Under 10 female champion), Shreyas Smith (21-year-old national champion) and Joshua Christie who, at 16, is our latest Fida Master. 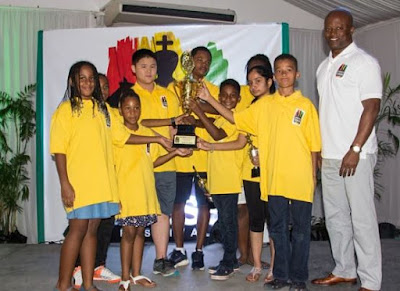 And after 34 rounds, the Raging Rooks won the tournament – and the all-important bragging rights. “I’ve been playing chess for about eight years now,” shares Lantae Walker, 14, who attends Wolmers’ Boys. “Chess teaches you a lot of discipline. You have to sit down and be patient, plan and look ahead for things than can affect you in the game. So, in a way, it has improved my life.”

Chief organizer of the weekend-long festival, Nigel Clarke, gave himself a much-deserved pat on the back. “It surpassed my expectations. The energy and the vibrancy of the local chess community was on show,” he says. “At Emancipation Park we couldn’t contain the crowds. People were eager to get in and participate. Where else in the world have people seen 75 chess boards in one park?”

Coe agrees. Mission accomplished. “Part of the intention going forward,” she says, “is to build on this success and spread the appreciation for chess and watch it grow across the island.” >