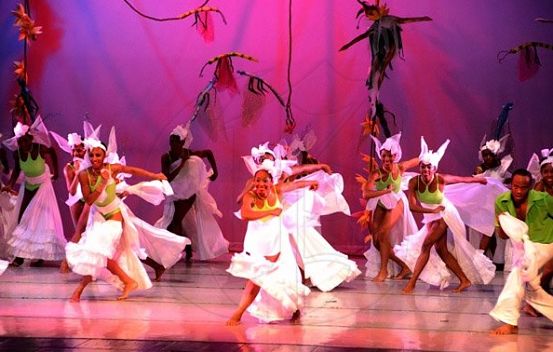 SET IN MOTION: Vibrant choreography and costuming contributed greatly to the show's success.

THE just-concluded season of dance from Dance Theatre Xaymaca (DTX) was an affair to remember. What greeted audiences at the Little Theatre this past weekend amounted to a sizzling blend of innovative choreography, kaleidoscopic lighting design and vibrant costuming to amply demonstrate just how much the (predominantly female) company has evolved since we last saw them.

What Barbara McDaniel and her creative team have admirably succeeded in doing is to combine groomed talent, youthful exuberance and an appreciation for the rigours of dance theatre to create a kind of full-bodied entertainment that has amassed an ardent (and growing) following.

This year, the choreographers chose to explore a mixed bag of concepts and ideas, ranging from oppression and resilience to womanhood and healing, to where the Jamaican dancehall is going.

Of the repertoire’s eight works, McDaniel choreographed two. The stronger of the pair was show-closer “Cry Freedom,” a burst of bright colour and energy and Africa-derived aesthetics steeped in struggle and survival and sweet salvation. The dancers moved in sync, creating a series of gorgeous formations as the hyper-rhythmic accompaniment transported them – and us, the appreciative audience – to higher ground.

McDaniel’s other offering, a remount of 2004’s “Space of the Mind,” was a stunning contrast, featuring red-clad dancers moving to Celtic musical accompaniment and making excellent use of space, as the piece grew in texture and urgency.

Fresh from her tour-de-force with North America’s Alvin Ailey troupe, Renée McDonald brought us “Until November Comes,” a dream-like sequence full of desperate yearning that took on surprising contours and impressive depth. The dancers (clad in long side-split skirts) found the requisite emotional intelligence to satisfy McDonald’s vision and to interpret the melancholy strains of singer Regina Spektor and the virtuosic stylings of Max Richtor.

While Jessica Shaw looked to the Swing era for inspiration for her funky, big-band-jazz-infused work “Jigsaw,” which opened the show, Catherine Reid turned to the modern dancehall space for her energetic, attitude-laden “Talk to Wi Nice!” featuring sexy party girls working out to tunes by Ding Dong, Konshens and Aidonia.

Only two male dancers (Orrette Beckford and Jeranimo Mullings) appeared in the whole show; three male choreographers made contributions. Onaje, who came of age with the troupe as a performer, created a latter-day wasteland where misery eventually gives way to joy in “Thirst.” Nicholas Alexander achieved a ‘feminist’ triumph with “Nemow,” a gorgeously costumed look at womanhood and healing, with Beyoncé and the Selma soundtrack supplying inspiration. (Reid delivered powerful solo work here.)

Then there was Michael Holgate’s robust “Trodding Thru,” about resilience and post-slavery attitudes, complete with Rasta-themed costumes and Junior Gong on the speakers. The diversity in content and context only served to heighten the show’s appeal. Minor glitches and occasional delays between the works aside, the show had great pace.

In the end, Dance Theatre Xaymaca’s 2017 season (their 22nd) reaffirms our belief that the combination of innovative choreography and strong supporting elements goes a far way in producing stage magic.