PRAISE IN MOTION: The Nickeisha Jones-led Laud Dance Ministry wins you over with high-energy dance theatre and stirring testimony 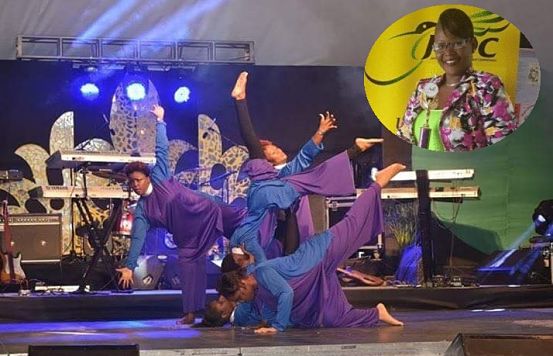 'LAUD' AND CLEAR: The 11-year-old troupe earns kudos for its entertaining and spirit-lifting works; Inset: Jones.

TO the dozens of tweens and teens who make up the junior cohort of Laud Dance Ministry, Nickeisha Jones is simply Auntie Nicky. Sitting in on a recent dress rehearsal at the Little Theatre, before long, you totally understand why. In person, Jones comes off like the affable relative, neighbour, church sister, you’ve known all your life. In other words, she feels like family. What’s more, here is a woman, a devout Christian, who took it upon herself to bring together talented dancers from several denominations to form a dance company committed to life-changing ministry through the performing arts.

It’s been 11 years since the troupe flew out of the starting blocks, emerging from a church concert/rally, as the story goes, where Jones felt inspired to do something unprecedented. “I got the idea to bring together all the dancers who took part. We started out with just nine members, and we’ve been growing steadily ever since,” recalls Jones, who in the demanding role of Artistic Director guides an army comprised of tiny tots, primary-school kids, high-schoolers and young adults – all putting in hard work to present performances that both uplift their audiences and glorify God.

“Our work is just to go out there and minister, but the aim for us, is to, at the end of every performance, to touch even one soul who wants to give their life to God,” Jones explains. “We want to show people that we’re dancing for God and we are transforming lives for God.”

The troupe’s 11th anniversary season at the Little Theatre last weekend got the job done and then some, delivering and entertaining and spirit-lifting blend of community drama, interpretive dance theatre and rapturous musical accompaniment that lived up to the curious label they’ve been given since entering the annual JCDC Performing Arts Festival. “They call us ‘brute force’ because the energy we bring to the stage is hardcore. We’re not cute,” says Jones, chuckling. They call their style Laud-tech – less technical rigour, way more vigour. “We make it a point of duty that whatever we’re doing for God, we must do it with our all.”

The West Kingston-based Tivoli High is where Jones began her performing arts sojourn with the school’s widely acclaimed dance troupe. A stint with Praise Academy of Dance followed, starting in 1999, shortly after she got baptized. Since then, she’s worked with Praise Academy as performer and choreographer and still lends her time to their ministry while grooming her own dancers at Laud.

Above all, the growth of the group is what Jones, now 37, is most proud of. “I was thinking about that up to last week; how much we’ve grown over the 11 years. I know groups that have started out and within two years they stopped,” she says. “We have our issues, like any other family, but we always rise above them and come back to our main objectives because we have a mandate and that keeps us focused.”

In the meantime, finding a permanent home base to call their own is high on the priority list going forward – as well as taking their pyrotechnic brand of dance ministry to overseas audiences. “We want to see Laud in the Caribbean and further overseas,” Jones says, waxing optimistic about the road ahead. “We’re committed to spreading the ministry through dance.”