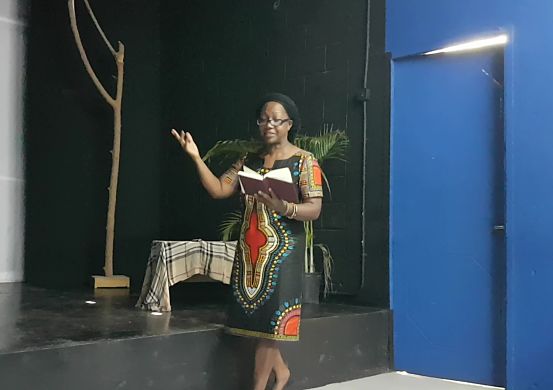 WISE WOMAN: Montague, 59, says her primary aim is to share a fresh perspective on a tough subject.

DEPORTATION is one of the most polarizing hot-button issues of our time. It’s always in the news and frankly, for many, it’s something they’d rather not discuss. Who can forget the strong reactions to the David Cameron prison offer, in the wake of a mass deportation of Jamaicans from the UK in 2015? It’s an issue that will always be with us. It simply can’t be ignored.

Masani Montague places the hot topic squarely at the centre of her provocative one-hour play Danger to the Public, an acclaimed work that delves into causes and consequences associated with deportation.

It’s set in Canada, Montague’s adopted home where the Immigration Act’s notorious Bill C-44 was passed in 1995. The play follows a Jamaican businessman (living in Toronto for 25 years) who runs afoul of the law and gets deported to Jamaica after being convicted, leaving behind his family and his business. As the playwright explains, she wanted to look at the plight of Jamaicans who land in hot water with the Canadian authorities – and the desperate struggle to get back on their feet.

“Jamaicans are the third largest population in Canada, behind New Yorkers and people from London, and Jamaicans get into a lot of trouble in Canada. A lot of things are written about Jamaicans that sometimes make you hold down your head in shame,” says the Toronto resident, who wrote Danger to the Public while pursuing a Master’s degree at York University. “So deportation is a major issue in the society. It’s still current. But I wanted to look at it through a different lens, make it a more personal story. I wrote the play nine years ago, and what I’ve found is that the problem is still affecting society in a major way.” The Rastafarian playwright, who left Jamaica as a teenager back in 1974 to live in Toronto, has always explored social justice matters (police brutality, gender violence) in her work, taking very seriously her role as change agent.

But deportation is the topic that gives her pause. “I think it is unfortunate that some people leave home at a tender age to make a better life for themselves in a foreign country and end up getting criminally penalized for small issues. Sometime it seems very unfair,” she argues. “So what I’m hoping is that people who watch the play will see the issue of deportation in a new light and be more sympathetic to the plight of deportees because they each have different stories to tell.”

Montague, for her part, returns to Jamaica as often as possible – by her own free will. “I love coming home. It allows me to reconnect with my roots and share the play with Jamaican audiences,” says Montague, who recently flew in for the Rex Nettleford Conference and will be back in November for the Jamaica Music Conference. (Montague is also a show promoter, who’s been putting on Rasta Fest in Canada every August for the past 17 years.)

This mother of two – a 27-year-old son and a 17-year-old daughter – is turning 60 next year. To mark the milestone, she wants to release a documentary version of Danger to the Public, which commences filming next month. The author of 1984’s Dread Culture, inspired by the plays she’s written over the years, she’s also working on a novelized version of the work.