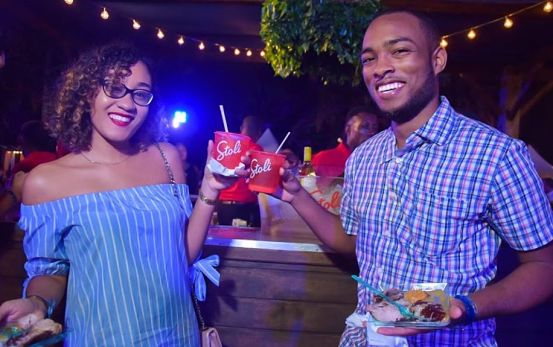 FESTIVE AFFAIR: Patrons had a blast sampling the fare at this year's festival.

AT a festival food market, you expect to find mouth-watering cuisine, exciting new food products to sample and patrons gliding from one vendor to the next because they don’t want to miss a thing. You got all that and much more at Meet Street & the Market, a foodie’s getaway, held under the Jamaica Food & Drinks Festival banner, that brought an awesome energy (and tantalizing aromas!) to the Kingston Waterfront on Saturday evening.

While a deejay supplied the party anthems, the scores of patrons got acquainted with the offerings from the nearly 25 exhibitors. They included Walkerswood Jerk, Appleton Estate, National Bakery, Bad Dawg Sausages, Tru Juice and Copperwood Premium pork, and a number of restaurants and delis gone small-scale for the event. You could smell the jerked chicken and jerked pork and wholesome gourmet goodness from a mile away.

The food trucks and pop-up kitchens staffed by talented chefs attracted hungry customers like bees to honey well into the night.

“We wanted to provide a platform for food purveyors and gourmet artisans, along with the food trucks and pop-up kitchens, to showcase what they’ve got and to create an outlet for them to get customers. It’s about growing the commerce,” explained Leisha Wong, chief coordinator of Saturday’s event, who is also known for her involvement with the seasonal Kingston Kitchen. “It’s a really nice family day out, with live entertainment, and a great way to support the food industry, which continues to grow. Food is at an exciting place in Jamaica right now. This year’s food festival events were sold out, so we’re definitely growing.”

Festival director Alicia Bogues couldn’t agree more. “We are celebrating our third anniversary this year. We were very strategic in our approach, and it worked. We were oversold,” she told TALLAWAH as the patronage swelled by the minute. “We added a new event, ChopStix, and people came out to support all the events despite the rain.”

With such events as Meet Street & the Market and the other roster highlights, Bogues feels the Jamaica Food & Drinks Festival will only expand and play an increasingly diverse role in Kingston achieving a place among the food capitals of the world. “One of the things we’re most proud of is that we partnered with the KSAC as part of the 145th anniversary of Kingston gaining city status,” Bogues said. “The aim for us going forward is to help position Kingston as a global destination for food.”