DANGER & DESIRE: Fifty Shades climaxes with a sexy-spiky valentine for the fans 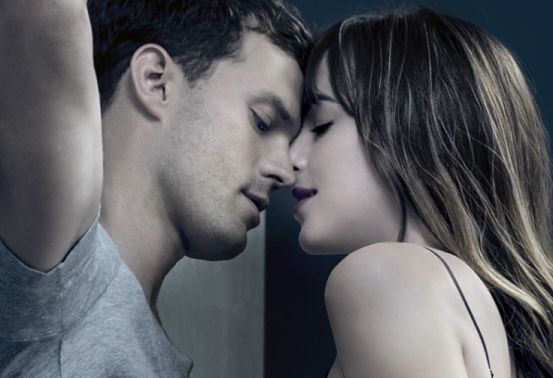 MR. & MRS. GREY: The sizzling Dornan-Johnson chemistry is one of the film's highlights.

THE course of true love never does smooth. For passionate lovebirds Christian Grey (Jamie Dornan) and Anastasia Steele (Dakota Johnson), the toughest hurdle of their lives together appears as soon as they become newlyweds. Their honeymoon is cut short.

Ana’s vengeful old boss Jack Hyde (Eric Johnson) wants his pound of flesh and is going to extreme lengths to make life miserable for the couple. When he’s not breaking into Christian’s office to steal files and leave a fire in his wake, he’s attempting to kidnap Ana while Christian is away on business in New York. Luckily, Husband long insisted on 24-hour bodyguard protection for Wife, and even though Ana complains that she feels like a caged animal, she knows it’s for her own good.

But the terror is far from over, as Jack has an old score to settle. He plots and executes a kidnap-for-ransom that’s done so swiftly it catches everyone off guard.

That’s the basic premise of Fifty Shades Freed: The Final Chapter, the curtain-closing instalment of the cinematic franchise based on EL James’ worldwide bestsellers. Directed by James Foley (with screenplay by Niall Leonard), the near 110-miute film is a hugely entertaining affair that, as expected, has lots of soapy gloss and is thin on the meat. But, at its core, it’s a valentine to the fans who fell in love with Ana and Christian and can’t let them go.

Fifty Shades Freed is the most intense and dramatic of the three films. But the diehards come to Fifty Shades for the spice and the erotica, and they don’t leave disappointed. The love scenes sizzle and the dominant-submissive dynamic is played up to the hilt.

But there’s more to life than hot sex, and as such we get a glimpse at the deep-seated yearnings and vulnerabilities of these two people who are devoted to each other but very much want to hold on to their individual identities – especially Ana who clings to her fiction-editor job at Seattle Independent Press when Christian’s attention becomes overwhelming.

Even so, their chemistry is unmistakable (Dornan and Johnson seem ideally cast), and it’s one of the film’s strongest assets. They make love, they bask in each other’s company. Naturally, the ride gets bumpy. They don’t see eye-to-eye on issues like having children and the responsibilities that parenthood will bring. But they prove that their solid bond can survive anything – especially in a time of life-and-death crisis. Tyrone’s Verdict: B+

Email ThisBlogThis!Share to TwitterShare to FacebookShare to Pinterest
Labels: At The Movies, Current Cinema, EL James, Film Review, Flick of the Week