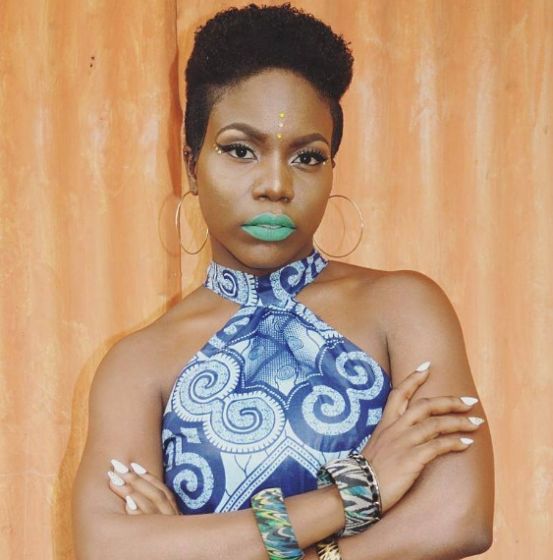 BRINGING IT: "I'm taking my time to get it right," Brown says of the EP she has planned for 2018.

“I’M a full-time performer,” declares Shanique Brown, explaining the delicate balancing act that now forms the crux of her life in the arts. The twenty-something star, who has been winning fans as GiRL (her soulful alter ego), has joined the ensemble cast of DMH Productions’ Dat a Gwaan Jamaica Remix, which plays to her strengths as a songstress, actress and budding comedienne.

She shines among her castmates in the hit comedy revue, taking on roles that range from a ghetto-fabulous vendor to a delinquent tenant dodging her landlord to Commissioner-of-Police hopeful Novlette Grant.

Fresh out of Ardenne High, theatre quickly became Brown’s firm base but she’s always had music in her heart. So before long, while taking acting jobs, she was appearing on the Kingston live music scene, recording singles like the infectious jam “Fly” (with Dat a Gwaan Jamaica costar Kadeem ‘Kenzic’ Wilson) and teaming up with producers for her forthcoming EP and her first full-length album.

“It’s been an interesting journey,” she says in a masterpiece of understatement, moments after wrapping another performance at the Phoenix Theatre. A few feet away, her costars are chatting with patrons, who seem to have enjoyed the show immensely. “That’s what it is for me – a journey. It’s a lot of work; it gets hard, but I prepare. And I like a challenge.” It shows. Attempting to break into the music mainstream demands more than a gorgeous voice and a pretty face. It takes real resilience. But, as Brown says, she is prepared.

In addition to doing more stage work this year, she wants to put out her debut EP by the time summer arrives. “I’m taking my time to get it right. I’m not making any promises as to the release date, but the fans will enjoy it,” she offers. “I’ve learned from the past singles I’ve released and how people have responded because I want to perfect the others that I have coming out.”

As if that weren’t enough, Brown takes pleasure in rekindling her passion for film work. She has completed two screen projects due for release in 2018 – including a short titled The City of Man. For Brown, what’s happening in her career now is a nice transition from 2017, when she appeared in Michelle Serieux’s Sugar and Kurt Wright’s Origins – both of which earned critical acclaim locally and regionally, thanks to the Propella initiative.

As for taking a turn behind the camera as a filmmaker, that might happen eventually, but as things currently stand, Brown’s plate is more than full. “I really want to finish my EP and get it perfect,” says the soft-spoken and chocolate-hued starlet, who sat on a panel at the recent Voice of a Woman Festival, honouring entertainment Grace Jones and Jamaican women making great strides in the arts. “Oh, and I want to put on five more pounds.”