KELLY PRICE IN J’CA: The R&B diva pays tribute to Whitney, recaps her journey at Red Rose for Gregory 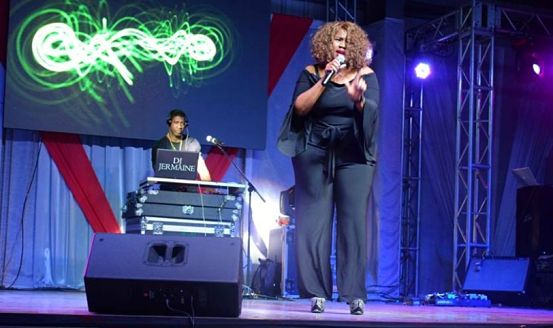 MISS MELODY: Price brought her signature mix of powerhouse vocals and testimony to the mainstage.

“I loved her for being honest with me,” Kelly Price said on-stage at Jamaica College last Wednesday night, paying tribute to her late R&B sister and good friend Whitney Houston. “She gave me great personal advice about my career and about life. And in spite of all the things that she went through there will never be another like her.”

Price’s reflection on her close friendship with Houston and the good times that they shared came during an electrifying performance at Red Rose for Gregory, before a packed house – red-and-white-clad couples, music lovers and other patrons basking in the great vibes, on the occasion of Valentine’s Day.

The six-time Grammy-nominated songstress, sporting a black form-fitting number and rocking divalicious curls, promised to take the patrons on a journey reflecting her eventful career – from the late 90s when record execs and other detractors told her she was “too fat, too Black and too loud” to have a successful career to the height of the 2000s when she did her own smash rendition of Shirley Murdock’s “As We Lay.”

For close to an hour, Kelly had her audience transfixed with her stagecraft, empowerment pep talks and commentary on everything from body image to self-worth.

Blessed with lush vocals and a multi-octave range that can raise the roof, Price gave spirited renditions of some of her classic tracks (“It’s My Time”, “You Should’ve Told Me” etc.), snippets of the tracks she penned for P. Diddy, Mase and the Bad Boy family, and “Heartbreak Hotel,” which memorably teamed her with Houston and Faith Evans.

But arguably the biggest hit of Price’s career is the “Friend of Mine” remix featuring Ron Isley and R. Kelly. As expected the audience sang along word for word, and Price (who was ably assisted by her disc jock DJ Jermaine) brought her performance to a triumphant close.

Red Rose for Gregory was co-headlined by Freddie McGregor, who delivered the big hits of his illustrious career and a Dennis Brown tribute to the euphoric delight of his on-their-feet fans. Short Boss (at right) gave a short-and-spicy set earlier in the night, as did Robert Minott and St. Ann-based rising star Kaydeno.

There were no words to describe the pitch-perfect showcase delivered by Pat Edwards, Karen Smith and Gem Myers (who go by Pakage). They brought the house down with pristine three-part harmonies, delving into a suite of disco/Motown jams and classic anthems that whetted appetites for the feast that was to come.