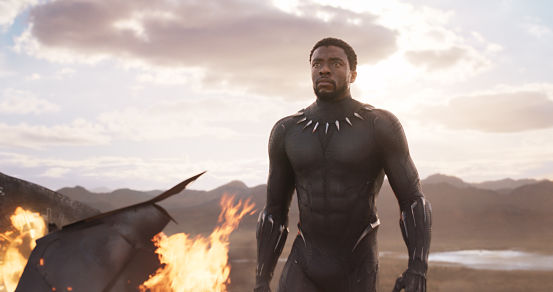 IN every society there comes a time when somebody feels it’s time for change. Time for a different way of doing things; time for a new leader to rise. Some agree, some don’t and the result is often a divisiveness that leads to disastrous conflict. It’s this kind of conflict that’s at the heart of the long-awaited 3D epic Black Panther, based on Stan Lee’s Marvel comic, which opened in theatres last week.

Directed by Ryan Coogler (who co-wrote the script with Joe Robert Cole), Black Panther is a dizzyingly entertaining and frenetically paced action fantasy spectacle that more than lives up to the hype. Its cross-generational appeal sets it apart from the other Marvel fantasy flicks that flock to the cineplex every year. What’s more, it’s fuelled by astonishing Black star power.

Chadwick Boseman (last seen in Marshall) is fine form as he tackles the extremely physical title role, complete with high-tech catsuit. As the heroic T’Challa (aka the Black Panther), he is the newly installed king of the African country of Wakanda, which his beloved father ruled until his untimely death.

Wakanda is an endlessly fascinating place, blessed with vast wealth and enviable resources and a technology they’ve managed to keep secret for generations. Selfish or wary of outside influence? In no time, T’Challa has his hands full, grappling with opposition to his rule and the re-emergence of an old Wakandan enemy, Ulysses Klause (Andy Serkis), who is keenly interested in their vibranium, a powerful metal that they country has in copious abundance.

But T’Challa’s toughest test arrives in the guise of a long-lost relative named Erik Killmonger (Michael B. Jordan), who sets his sights on the throne. It’s an unforeseen development that changes everything, and life in Wakanda may never be the same.

With its stunning 3D visuals and intriguing plot points, Black Panther vigorously explores tragic family history and vengeance mixed with a sturdy look at kings and succession, and a people fighting to protect their resources and way of life. No one is more committed to this fight for Wakanda than Okoye (Danai Gurira), the fearless, tough-as-nails warrior and army general whose most potent asset may be that gleam in her eyes. You want her on your team.

The movie’s A-list supporting cast is superb, with Lupita Nyong’o playing Nakia, the voice of reason among the people of Wakanda and the most loyal of T’Challa’s supporters. Fellow Oscar winner Forest Whittaker plays Zuri, their wise old spiritual leader; newly minted Oscar nominee Daniel Kaluuya (Get Out) is W’Kabi, a respected adviser to the king; Letitia Wright is T’Challa’s tech-savvy baby sis Shuri whose brain power belies her tender years; newcomer Winston Duke plays M’Baku, leader of the Jabari tribe; and Angela Bassett puts in a scene-nabbing, accent-rich performance as the devoted queen mother. (“My son, it is your timmme.”) Martin Freeman and Sterling K. Brown also make appearances.

Coogler does a very fine job weaving all the elements into a compelling, entertaining whole. Interestingly, the soundtrack is rather subtle, never competing with the visuals or the on-screen action for prominence.

Audiences will enjoy being transported to this otherworldly place called Wakanda, where T’Challa’s baptism of fire as ruler offers lessons steeped in the fact that uneasy lies the head that wears a crown. Tyrone’s Verdict: A-