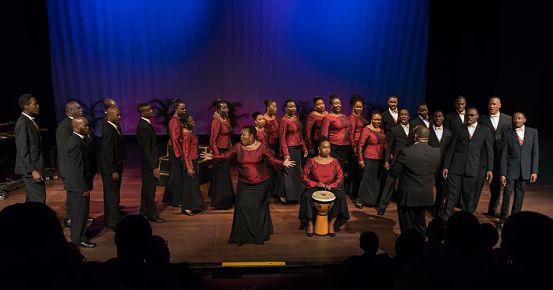 EVERYONE agrees that the best way to pay tribute to the late great Rex Nettleford is to experience his living legacy in living colour. The new-generation National Dance Theatre Company (under the leadership of newly appointed Artistic Director Marlon Simms) and the University Singers (led by Noel Dexter successor Franklin Halliburton) put on a fantastic show in his honour last Tuesday night – a joint performance dubbed “Remembering Rex,” under the auspices of the Rex Nettleford Foundation.

Full of living colour, visual power and energy, the troupe’s work on the night offered sterling reminders of the indelible contributions that Nettleford made not only to their respective repertoires but to the arts nationally.

The Singers opened with a robust rendition of “Lift Every Voice,” powered by a harmonious blend. With Simms interpreting the music with movement, Halliburton took a solo moment with a splendid performance of “The Lord’s Prayer” before the choir returned centrestage to do “Ave Maria,” a sprightly version that Halliburton arranged.

Elsewhere on the programme, they offered a couple memorable Negro spirituals – Christopher Whyte taking the lead on “I Couldn’t Hear Nobody Pray” and soprano Racine Barrett showing off gorgeous vocals as she led “Ride on King Jesus”.

“Seasons of Love” from Rent also found favour with the sizeable audience as did their “South African Medley”, arranged by Kathy Brown. The “Rocksteady Suite” (arranged by Djenne Greaves) teemed with roots-rockin’ nostalgia.

The dancers, meanwhile, contributed five works to the show. The choreography for 2002’s “Incantation” was supplied by Jeanguy Saintus, while Troy Powell choreographed the engrossing “Unscathed” from 2015. As ever, “Tintinnabulum” (1997) was testament to Nettleford’s penchant for creating works that reflect the deep social forces at work in Jamaican traditions and customs.

Of course, the same can be said of “Kumina,” his 1971 classic, for which Simms and Keita-Marie Chamberlain assumed the roles of King and Queen, under a bright full moon, leading the company to a triumphant curtain call.

But the night was not all about Nettleford. Barry Moncrieffe, who took over as Artistic Director when Nettleford passed in 2010 and retired from active duty in December, was specially honoured by the foundation, with Ambassador Richard Bernal presenting him with an award for his 55 years with the NDTC. “Fifty-five years is a long time and a long journey, and I wouldn’t have survived without your love and support. Thanks to those who really held my hand along the way,” he said, accepting the honour. “My successor, Marlon Simms, he’s ready.”