THIS ISLAND NOW: Dat a Gwaan Jamaica serves up a clever and superfunny remix 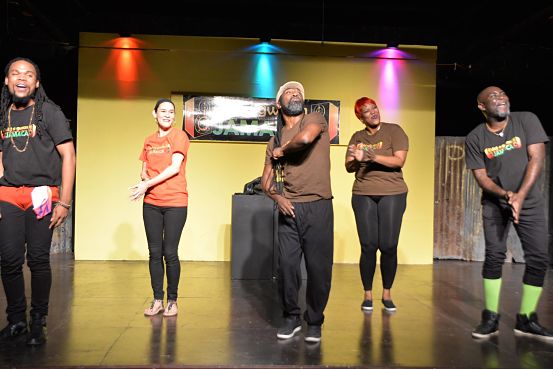 COMIC RELIEF: With a solid cast and hilarious sketches, the revue deserves its encore.

“THE remix ah go sweeter.” That’s no idle boast. It’s a promise that thoroughly delivers. The sequel to the dancehall comedy revue Dat A Gwaan Jamaica, penned and directed by Dahlia Harris, buzzes with an infectious energy and packs the kind of laugh-out-loud humour that audiences crave when they flock to the theatre to get their money’s worth.

Like its predecessor, the show employs music, ghetto-fabulous excitement and rib-tickling comedy in casting a keen, mischievous eye over the national status quo. This time around, there’s no Gully Bop drama and Minister Audley Shaw is spared a roast. Instead, the spotlight captures a Religious Hardtalk showdown between Mutabaruka (Everaldo Creary) and host Ian Boyne (Chris McFarlane).

Police Commissioner hopeful Novelette Grant (Shanique Brown) goes to seek advice from a man who can see things. And Harris takes a poke at Jamaica’s “begging problem,” playing a female emigrant sending holiday greetings from abroad and lamenting the strains of “foreign life.”

Meanwhile, Kadeem Wilson shows some versatility, performing “State of Emergency,” a dance number driven by the boom and bass of poor-people governor Rodney ‘Bounty Killer’ Price. McFarlane gets a splendid monologue moment when he delivers “InSecurity,” sharing the colourful experiences of a former top cop who is given the boot.

Harris’ household helper is back with more concerns and observations, placing yet another call to Miss Emily’s “Hotline,” while dusting her employer’s living room. And fans of the original Dat a Gwaan Jamaica will rejoice to get a second serving of Ishawna’s bandana and the side-splittingly funny “Rent A Fren’” skit.

In short, Dat a Gwaan Jamaica Remix, with its competent cast, is sketch comedy/musical revue done right, blending gossip and ghetto gospel with message and non-stop amusement. Tyrone’s Verdict: B+